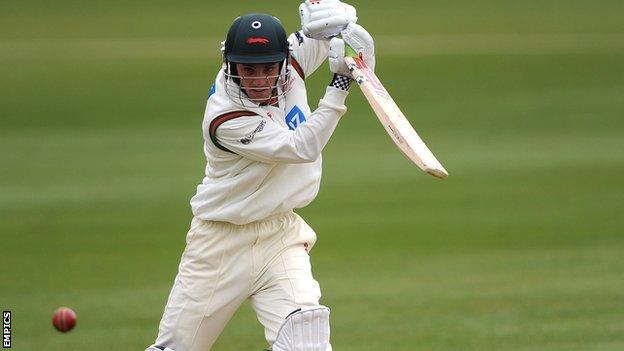 An unbeaten 104 from Ned Eckersley and half centuries from Greg Smith and Angus Robson helped Leicestershire dominate the second day against Essex.

Resuming on 254-6 Essex collapsed to 281 all out with seamer Nathan Buck (5-76) claiming his best first-class haul.

Despite the early loss of Matthew Boyce, Smith (59) and Eckersley added 114 as the home attack toiled after losing Tymal Mills to a side strain.

The Leicestershire bowlers wasted little time on the second morning making further inroads into the home batting with Buck and Charlie Shrek (2-54) removing Kishen Velani (26) and Tanveer Sikandar (5) with only 13 added to the Essex score.

The two bowlers then claimed another wicket apiece as the Essex innings was wrapped up inside the first nine overs of the day as four wickets fell for just 17 runs.

Although Boyce perished to the eight ball of the day, caught behind off Oliver Newby, it was loss of left-arm fast bowler Mills after he bowled only 10 overs that proved pivotal.

It was another 37 overs before the Foxes lost another wicket when Smith was caught off the spin of Monty Panesar as Essex's seven other bowlers failed to keep wicketkeeper Eckersley and Robson in check.

Eckersley brought up his century just before the close with Leicestershire's third-wicket stand already worth 139.

Essex coach Paul Grayson said Mills' side strain will be assessed on Tuesday morning, but that he is most unlikely to bowl again in this game.

"There are so many new faces in the Essex dressing-room for this match that introducing all the newcomers to their colleagues must have been something akin to a speed-dating event.

Oliver Newby, on loan from Lancashire, and Tanveer Sikandar, fresh from club cricket with Potters Bar, are making their first appearances for Essex while Kishen Velani only played in their final match last season.

An already threadbare opening attack was further depleted when Tymal Mills fell over in a heap in mid-afternoon and subsequently went off nursing an apparent side strain to be replaced by twelfth man 19-year-old Jake Foley.

Probably to his considerable surprise, it was then Tanveer who took the second new ball as the visitors ground their way towards the hosts' total and skipper James Foster used all his experience to ensure that no more than the statutory 96 overs were bowled in the day.

"Leicestershire are close to establishing a position of complete dominance after Greg Smith, Angus Robson and Ned Eckersley took advantage of an Essex bowling attack already missing David Masters and Graham Napier to injury and now without Tymal Mills too.

"By the time of Mills' departure, the Leicestershire batsmen were already in control, and an excellent Bank Holiday crowd watched resignedly as the visitors went about the job of accumulating runs.

"After 'getting in' in all four of his previous championship innings this season without passing 50, Eckersley was prepared to be patient, and fully deserved to reach his century shortly before the close. A word too for Nathan Buck who, along with the experienced Charlie Shreck, ensured the Essex tail did not wag earlier in the day and, on his first Championship appearance of the season. completed a five wicket haul.

"The Foxes will be looking to score more quickly on Tuesday, and if they do, will be in an outstanding position to force their first Championship win since September 2012 - and their first away from Grace Road since 2010."