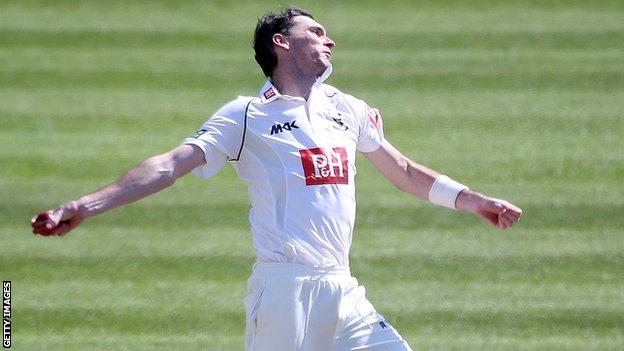 Sussex took control on day two of their Division One clash with Lancashire, who struggled again with the bat.

The leaders added 22 to their overnight score to be bowled out for 298, Michael Yardy being run out for 139.

Steve Magoffin (3-31) did early damage in Lancashire's reply, reducing the hosts to 48-5 at one stage.

But an unbeaten seventh-wicket stand of 77 between Tom Smith and teenage wicketkeeper Alex Davies rescued Lancashire, who closed on 157-6.

Overall, however, it was another bad batting day for the Red Rose county, who have yet to pass 250 in the first innings of any of their Championship fixtures this season.

In each of their first three matches of 2014, Lancashire failed to pass 250 in their first innings.

They were dismissed for 144 by Nottinghamshire, 247 by Warwickshire and 119 by Northants.

After Sussex resumed on 276-8, Lancashire needed 50 minutes of the morning session to take their final two wickets.

Sunday's centurion Yardy was the first to fall in the most unfortunate of circumstances, Glen Chapple diverting a straight drive from Magoffin onto the stumps at the bowler's end to leave the left-hander out of his ground.

But Sussex quickly recovered from that disappointment, Australian pace bowler Magoffin removing openers Paul Horton and Luis Reece before lunch, returning after the interval to have Karl Brown caught behind.

James Anyon then took the wickets of Ashwell Prince and Steven Croft in the same over to leave Lancashire in trouble and it got worse when Luke Procter fell lbw to Ashar Zaidi for 26.

Davies (41 not out) registered his highest first-class score and, along with all-rounder Smith (45 not out), helped the home side avoid the follow-on before bad light brought day two to an early conclusion with Lancashire 141 behind.

"Tom Smith's impressive start to the season with both bat and ball continues. Lancashire need his ability with the bat to shine through.

"His partnership with Alex Davies helped Lancashire recover from 80-6, when they were in danger of being asked to follow on.

"Davies, playing in the absence of Jos Buttler, batted superbly, showing great skill and patience. The pair will need to continue that in the morning if Lancashire are to get near to Sussex's first-innings total.

"A good performance in this game for Davies could strengthen his case for inclusion in the side as just a batsman when Buttler returns from England duty."

"Despite the excellent floodlights at Old Trafford, the umpires had no option under the current rules but to take the players off the field, as the last 21 overs in the day were lost to the light.

"Tom Smith and Alex Davies had looked largely untroubled at that stage. Their excellent partnership has ensured Lancashire have avoided the possibility of following on, which looked a distinct possibility when they came together on 80-6.

"However, on a wicket that has shown signs of taking spin, Sussex may not have enforced the follow-on, as batting fourth may prove difficult should the pitch start to take turn.

"Provided the weather holds, there should be two intriguing days ahead, with Sussex the slight favourites."