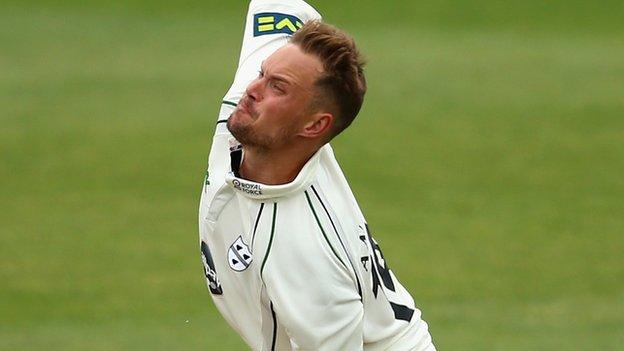 Resuming on 232-9, Daryl Mitchell added just eight runs before falling to Dean Cosker, becoming the last of five victims for the veteran spinner (5-39).

Worcestershire increased their lead to 105, making 20-0 before an early close.

Only Glamorgan's wicketkeeper-captain Mark Wallace contributed anything worthwhile for the hosts, making an unbeaten 51.

"Gareth Andrew was given the responsibility of the new ball following Alan Richardson's departure and has taken over the role with relish. Having only taken 21 wickets in the whole of last summer, his five first-innings wickets have taken him to 18 for the season.

"With Saeed Ajmal working away at the other end, Glamorgan, as with Worcestershire, could not find any batsmen to stay with the skipper, Mark Wallace, who was left high and dry at the end.

"While bowlers on both sides have performed well, it has to be said that some of the batting has been very ordinary.

"The highest stand of the game has only lasted 17 overs, and there is still very little in the pitch, with Andrew getting a bit of swing but bowling a good line and length and getting his rewards."