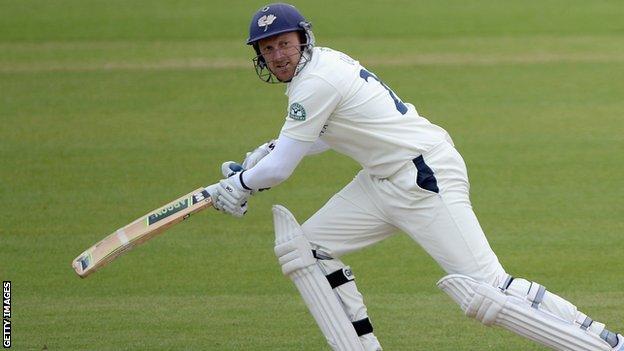 Yorkshire captain Andrew Gale hit 124 on his return to the side as the visitors built a huge lead over Durham.

Gale, who dropped himself against Middlesex, moved on from his overnight 35 as he and Jonny Bairstow (95) put on 198 for the fourth wicket.

Matthew Stoneman (48no) gave Durham hope but opener Keaten Jennings was caught behind off Ryan Sidebottom before play ended because of bad light.

Gale and Bairstow's partnership built on an excellent first day for Yorkshire, which had seen Adam Lyth score his first century of the season and New Zealand international Kane Williamson make 97.

They had resumed on the second morning on 299-3 and Adil Rashid's 68 and an unbeaten 41 from wicketkeeper Andy Hodd further strengthened Yorkshire's advantage.

Their declaration came in the 163rd over after Durham seamer Graham Onions took two wickets in two balls.

Onions was arguably the best of Durham's bowling attack but struggled to make an impact until his two late wickets, the second of which saw Liam Plunkett out for a golden duck.

"Champions Durham have some work to do to get back into this game, producing a poor bowling performance during which a number of catches went down.

"When Durham replied, Mark Stoneman was quickly into his stride, but Ryan Sidebottom accounted for Keaton Jennings cheaply.

"Bad light ended play early with the home side facing a massive deficit of 527. They will need to bat really well to keep Yorkshire at bay."