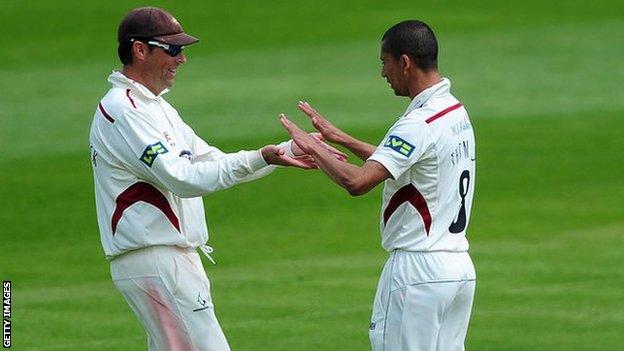 Alfonso Thomas's five-wicket haul and half centuries from Marcus Trecothick and Alviro Petersen saw Somerset battle back against Nottinghamshire.

Trescothick (72) then led from the front before falling to Peter Siddle.

But South Africa's Petersen (62) and Craig Kieswetter (32) were unbeaten when bad light ended play on 237-4.

After causing havoc on day one, Patel and Read's hopes of inflicting more misery on the visitors' attack were dashed when wicketkeeper Read was caught by his opposite number Kieswetter off Thomas in the third over of the day, having added just a single to his overnight score.

Patel's 179-ball knock ended when he gave Kieswetter his fourth catch of the innings before Thomas bowled Jake Ball to claim his fifth victim.

Lewis Gregory (4-80) then polished off the innings as Notts lost their last five wickets for 58 runs.

Chris Jones (20) and Nick Compton (25) gave Trescothick support before Petersen and Kieswetter took over to take the visitors to within 54 of saving the follow-on.

"Somerset came back well with bat and ball to leave the match evenly poised. Alfonso Thomas led the way with 4-31 in the morning session as the last five Notts wickets were cleaned up for the addition of just 58 runs.

"When Somerset batted, Marcus Trescothick looked back to something like his true form in scoring a composed 72 against disciplined and accurate Notts bowling on an unresponsive pitch.

"With Jake Ball absent (foot injury), Steven Mullaney bowled an unexpectedly large quota of the overs but again demonstrated how under-rated he is.

"With the heavy roller not being used, there might just be enough life in the surface for a positive result to be manufactured yet."