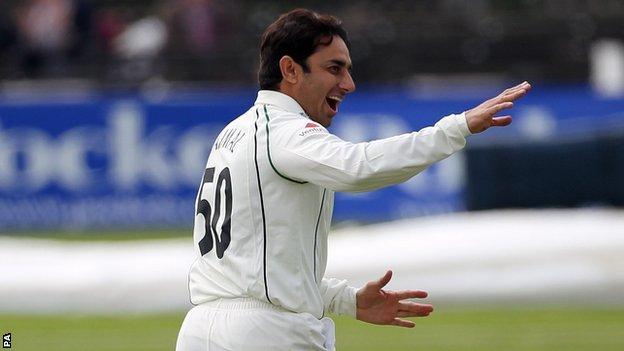 Pakistan Test spinner Saeed Ajmal claimed 4-40 as Derbyshire were beaten by an innings and 64 runs at New Road.

After declaring overnight on 432-9, the hosts set Derbyshire the challenge of batting all day to earn a draw.

But the visitors survived only until mid-afternoon, finally being bowled out for 149, captain Wayne Madsen top-scoring with 56.

Ajmal back in county cricket

That followed Madsen's unbeaten 111 in Derbyshire's disappointing first-innings total of 219.

Following the home side's declaration, on the back of Alexei Kervezee's first century in three years, Derbyshire went out to bat for a second time trailing by 213.

Gareth Andrew started the rot second time round, as Stephen Moore was removed cheaply for the second time in the match, the former Worcestershire opener being caught at slip by his old team-mate Daryl Mitchell.

Charlie Morris and Jack Shantry both weighed in with two scalps, while visiting spinner David Wainwright did himself no favours, being run out. He was beaten by a boundary throw from his former Derbyshire team-mate Ross Whiteley, attempting a second run.

Ajmal, making a delayed return to New Road after missing the county's first two matches of the season, ended up with match figures of 8-100, having also claimed a four-wicket haul in the first innings.

After following up their win over Kent a fortnight ago, Worcestershire are back in action on Sunday when they are expected to go to Cardiff to face Glamorgan without England batsman Moeen Ali, if he gets called up for next Friday's one-day international with Scotland at Aberdeen (9 May).

Relegated Derbyshire, still without a win after three matches, face a wait until Sunday 11 May before their next game when they host Kent.

"It was a good all-round team performance. There was not a lot of pace in the wicket and, in the first innings, not a lot of spin, so to bowl them out for 220 having lost the toss was a great effort.

"Everyone chipped in with wickets and we had the joker in the pack with Saeed Ajmal, He's a world-class genius.

"With the bat, that's as well as we've ever played. The way Alexei Kervezee and Ben Cox, and then Gareth Andrew, took it away from them was an amazing effort, allowing us to declare overnight.

"Alexei works as hard as anyone and really deserved to get that hundred. He got a fifty in our last game, so hopefully this the start of a big year for him and that he kicks on from here."