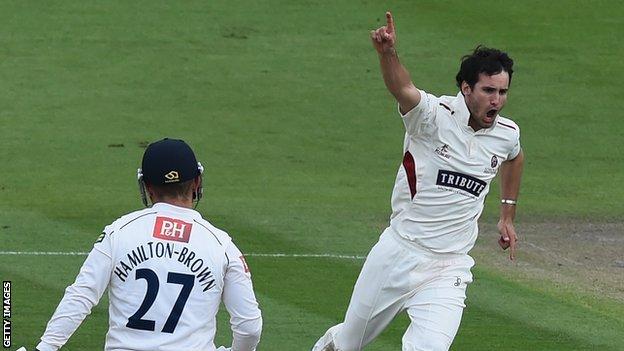 Peter Trego (2-45) then removed James Anyon to put Somerset on the brink.

Gregory (4-48) wrapped up the innings and 11 runs victory, bowling Jon Lewis to end with match figures of 9-97.

Any faint hope Sussex had of denying Somerset on the last day hinged on their lower order supporting in-form skipper Joyce, who began the day on 63.

But the early loss of Jordan, caught by James Hildreth at slip off Jamie Overton, piled the pressure on Joyce whose four-hour vigil was ended when he chopped onto his stumps off Gregory, seven short of a third Championship century of the summer.

The loss of Joyce signalled the beginning of the end for the home side whose first defeat of the season was sealed when 21-year-old Gregory, who took 5-49 in Sussex's first innings, hit Lewis's middle stump to finish the match after only 75 minutes of the final day.

"We've been blown away in this game. I think there's a few people hoping to get runs rather than expecting to, which is a difficult place to be," Joyce told

"It's not a lack of effort or lack of training, that's for sure. Everyone's putting a huge amount of effort in.

"This is a quality division and you're going to lose games. We'd have taken two wins out of three at the start."

"I'm delighted with the whole performance over the three-and-a-half days.

"We had to work hard in all aspects. They made us really grind it out.

"No victory comes easy but we played well and did the right things. To come away with the points is a brilliant feeling."

"This was a convincing win for Somerset, which will go some way to erasing the memory of their heavy defeat to Sussex last year at Horsham.

"They were always in control despite losing the toss, and the partnership between Marcus Trescothick and the impressive Nick Compton on the first day laid a solid foundation which Sussex never threatened to overturn.

"Lewis Gregory added to his burgeoning reputation with nine wickets in the match, plus a hard-hit 47, and was ably supported by some terrific catching.

"Sussex did not help their cause by dropping three difficult chances on the second morning. However, of more immediate concern will be the middle order which failed in both innings.

"They will be hoping that the experienced Chris Nash and Luke Wright come through this week's second XI fixture unscathed, to bring much needed experience and stability to the batting line-up."