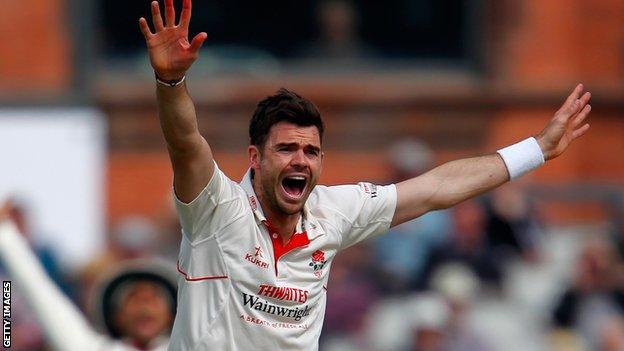 James Anderson proved too much for Northants as Lancashire sealed their first Championship win of the summer on the final morning at Wantage Road.

They began on 145-5, 95 short of their victory target, but Anderson quickly removed Ben Duckett and Steven Crook.

While Middlebrook was at the crease, there was hope for Northants, but he needed support from the other end.

Duckett (26) could do little about a diving return catch by Anderson after the ball took the leading edge, bringing to an end a stand of 80, but Crook was guilty of over-ambition when he tried to pull only the ninth delivery he faced and skied a catch to mid-on.

With only the tail remaining, Middlebrook attempted a flashing drive at a wide ball from Chapple, playing his first game in the dual role of Lancashire player-coach, and was taken by Ashwell Prince at gully.

James Anderson has now taken 18 wickets in three games at an average of 16.88

England Under-19 seamer Olly Stone, who had given Northants hope with four wickets on the third day, followed when he was caught behind from a thin edge of Kabir, who ended the game in his next over by sending Muhammad Azharullah's off stump cartwheeling out of the ground.

"Having lost the toss on a very spicy pitch, from our perspective we've done really well to come back into the game and then to close out the win," Chapple told BBC Radio Lancashire.

"Just to scramble to 119 (in the first innings) was an achievement. Our partnerships in our second innings, with Paul Horton up front and Jos Buttler and Tom Smith, gave us a good chance of bowling Northants out.

"It's a big win for us. Hopefully we can kick on for the rest of the season."

"England selector James Whitaker was on hand to see strike bowler James Anderson finish off Northants in little over an hour on the final morning.

"James Middlebrook and Ben Duckett's resistance on the third day had set up a potentially tense finish, but when a leading edge off Duckett was snaffled low off his own bowling by Anderson, it always looked liked Lancashire's game to lose.

"It is the fifth time Anderson has taken 10 wickets in a first-class match and he was a class act throughout.

"Middlebrook and Matt Spriegel apart, Northants' batsmen are short of runs with Trent Bridge next up in 10 days' time, but Duckett's performance with the bat and Olly Stone's display with the ball was encouraging in the long term."