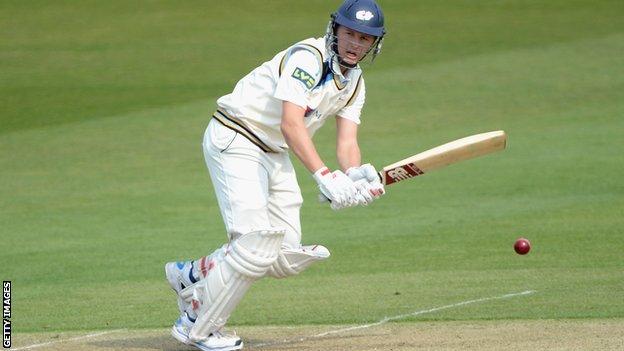 Yorkshire's Gary Ballance bludgeoned a second Championship ton of the season but Middlesex made a strong start to the task of scoring 472 to win.

The 24-year-old made 130, hitting his final 56 from 21 balls to press his case for inclusion in England's XI for the Test series with Sri Lanka in June.

Chris Rogers replied with 122 not out for Middlesex in an opening stand of 181 with Sam Robson (77).

Record-breaking not quite needed

The record fourth-innings run chase in the County Championship was achieved by Middlesex, who reached 502-6 to beat Nottinghamshire in 1925.

Should the home side pull off an unlikely victory, their score will still be 30 runs short of the County Championship's record fourth-innings run chase.

The fact Middlesex have any chance of achieving such a feat is proof of how much the Lord's pitch has flattened after the sides managed just 301 between them first time around.

Yorkshire began the day in a strong position on 213-4, and after Ballance was supported by Adil Rashid (43) and Andy Hodd (22), it was soon 350-9, leaving Ballance to take charge.

And the England man punished seamer Neil Dexter and the spin of Ollie Rayner to race well beyond three figures before Tim Murtagh finally had him caught at third-man.

Though not in the same fashion as Ballance ended his knock, Robson and captain Rogers scored at a rate well beyond four-an-over before the latter edged Jack Brooks to slip.

But that pace continued with Malan at the crease. Such positivity makes 472 an achievable target in terms of time, though Middlesex still face a colossal task to simply avoid defeat.

"A quite extraordinary day at Lord's has seen the game swing dramatically into the balance.

"Yorkshire would have felt more than comfortable with their position, which has been dominant throughout, when they were bowled out for 416 after some pyrotechnics from Gary Ballance.

"However, Chris Rogers has replied with a magnificent century under incredible pressure with a target of 472, and more than four sessions to bat.

"Opening partner Sam Robson must be close to being nailed on for England's first Test of the summer, as he hit 77.

"Dawid Malan played some further fluent shots towards the end and with nine wickets standing, Middlesex will know that with every run that ticks by, so the pressure will mount on the visitors."