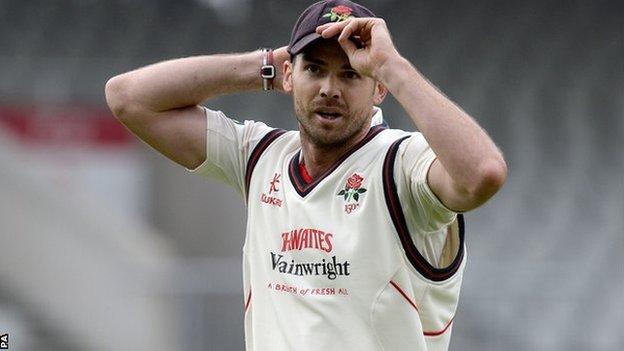 England paceman James Anderson claimed three wickets for Lancashire as their game with Northants moved towards a potentially tight finish.

It was a tremendous effort by the sixth-wicket pair, who stood firm under pressure - with Middlebrook taking a ball from Anderson on the helmet shortly before the close - and they will need another 95 on the final day to win the game.

The two sides were promoted together from Division Two last summer, but neither has registered a victory so far this season.

However, the quality of Lancashire's seam attack, and the absence from the Northants line-up of injured batsmen Alex Wakely and David Sales, appeared to tilt the match in their favour in the final session.

Stephen Peters hit two successive fours off Anderson, only to be squared up and bowled by a superb delivery in his next over and although Kyle Coetzer (19) was dropped twice, he was eventually bowled by Kabir Ali offering no stroke.

Matt Spriegel was caught at slip driving at a ball from Glen Chapple and Anderson (3-32) then removed Rob Newton and Andrew Hall in the space of three balls.

Another wicket could have sent the innings into terminal decline, but Middlebrook batted for 217 minutes and faced 175 balls as he and Duckett saw out the final 25 overs of play.

"It was a quite thrilling, if truncated day, which began at 1:45, and ended with all four results still possible. Olly Stone's handy six-over spell (4-7) gave Northants a target of 240, which was smaller than it might have been. The run was sparked by Steven Crook's spectacular full-length catch to remove Tom Smith.

"They started positively if cautiously but despite the loss of three wickets after tea, James Middlebrook remains undefeated at the crease on 78 despite offering two tough chances to Luis Reece and Tom Smith.

"Both Middlebrook and Ben Duckett have played straight and shown the required mental fortitude, with more required on the final day.

"Lancashire are still favourites, but by not much and this terrific game deserves a tight finish."

"This game has had so many twists already, it is almost impossible to predict just how it will end.

"For Lancashire, a fine partnership by Jos Buttler and Tom Smith, a record for the sixth-wicket for Lancashire against Northants, could prove to be decisive as could a fiery over from James Anderson where he took two wickets in three balls thanks to superb catches by Paul Horton at slip and Ashwell Prince at gully.

"The first session has proved to be the most difficult to bat during the game so far and Lancashire will hope that continues. Breaking the partnership of Duckett and Middlebrook early on should see them to victory."