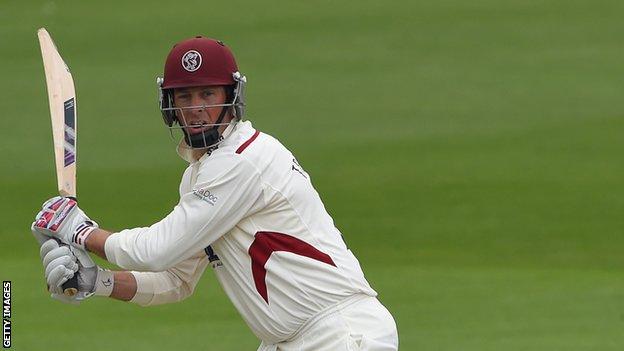 Ex-England player Trescothick reached his 52nd first-class hundred with a two off James Anyon during a fifth-wicket stand of 139 with Alviro Petersen (76).

Trescothick was finally bowled by Steve Magoffin for 116, while Chris Jordan (5-76) once again impressed for Sussex.

Alfonso Thomas took the wicket of Sussex opener Ed Joyce for six before the close, but the day will be best remembered for Trescothick's first four-day ton since September 2012.

That brought Petersen to the crease and the pair frustrated the home bowlers, with Trescothick getting to his five-hour century by easing through the covers off Anyon, before he and his partner fell shortly after.

Tail-enders Gregory - who hit his best-ever score of 69 two weeks ago - and Myburgh held up the Sussex charge with a last-wicket stand of 75, before the Division One leaders got out to bat briefly.

"There was no doubting the sincerity of Marcus Trescothick's team-mates as they applauded his first Championship hundred since September 2012, an innings which helped give his team the better of the second day at Hove.

"Trescothick shared a stand of 139 with Alviro Petersen, and after a wobble against the new ball the last two wickets added 105 with Lewis Gregory to the fore.

"After Somerset posted 372, Alfonso Thomas capped off the day nicely by dismissing the in-form Sussex captain Ed Joyce for just six with the new ball.

"Sussex may be the County Championship leaders, but Somerset have a marginal advantage at the halfway stage of this game."