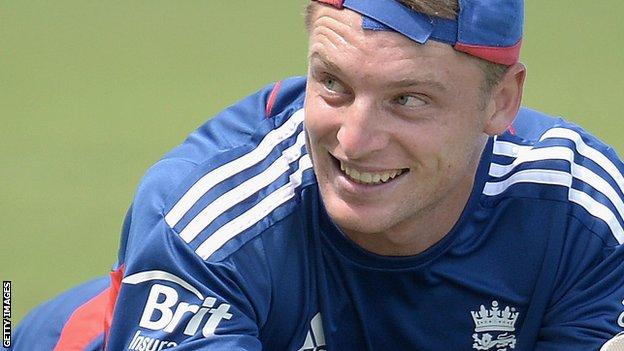 Jos Buttler hit 66 not out from 94 balls to boost Lancashire's hopes of beating Northants in Division One.

Northants had resumed on 133-8 after 18 wickets had fallen on day one, but Tom Smith struck twice as the home side were bowled out for 164.

Andrew Hall claimed three wickets to reduce Lancashire to 130-5, but England one-day wicket-keeper Buttler and Smith (44) saw them through to the close.

They put on an unbeaten 114 from 24.1 overs for the sixth wicket and the pair will look to press home Lancashire's advantage on the third morning at Wantage Road.

Earlier, Paul Horton (48) and Ashwell Prince (47) had helped to wipe out a first-innings deficit of 45, but former South Africa all-rounder Hall (3-49) removed both and also Andrea Agathangelou without scoring to give Northants the initiative.

Although there was not quite the drama of a frenetic first day, the game progressed sufficiently to ensure that barring inclement weather, one of the teams, both promoted from Division Two last summer, is likely to claim their first Championship win of 2014.

Six of the last 10 four-day meetings between the two sides have ended in draws.

"The visitors have taken control of this game with a brutal partnership between Jos Buttler and Tom Smith. When they came to the crease, Lancashire were wobbling and only 85 runs in front.

"Buttler and Smith hit through the line but were more aggressive than most other batsmen in this bowler-dominated game. The new ball, due in seven overs' time, is Northants' last chance to get a realistic target to chase.

"The day began with members thinking 180 would be a tough test for the home side to chase. Now, Northants may be looking at 280 and that will take some getting batting last against the likes of James Anderson, Glen Chapple and Simon Kerrigan."

"A superb unbeaten century partnership by Jos Buttler and Tom Smith has wrestled control of this contest back Lancashire's way.

"Buttler was devastating at times and Smith proved the perfect foil for him. Buttler has made a solid start to his career with Lancashire, with both the gloves and the bat, as he tries to force his way into the England Test team.

"A big score on day three from either of those two batsmen should take the game away from Northants."