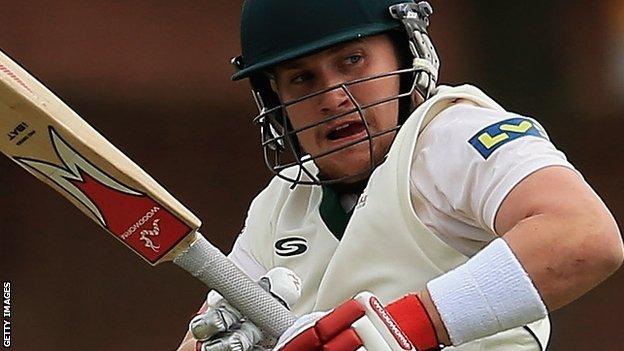 Josh Cobb and Niall O'Brien shared an unbroken stand of 84 as Leicestershire reached 221-4 on a rain-shortened first day against Glamorgan at Grace Road.

Second-wicket pair Matthew Boyce (49) and Ned Eckersley (42) got the hosts off to a good start after being put in.

Graham Wagg (3-68) took three quick wickets, including Eckersley and Angus Robson in consecutive balls, to put Glamorgan on top at 137-4.

Leicestershire had put on 49 for the first wicket before Wagg caught Greg Smith (28) in the covers from Jim Allenby's bowling.

Boyce was patient, while Eckersley got on with things before both were dismissed by the same combination, Wagg having both caught behind by wicket-keeper Mark Wallace.

When Wagg then castled Robson, Glamorgan were hopeful that Leicestershire would fold quickly.

Cobb, who enjoyed some good fortune, and O'Brien had other ideas and both scored at a quick tempo to put the hosts back in charge.

They ensured the scoring rate for the day was a healthy 3.45, with Cobb striking nine boundaries in his 73-ball knock and O'Brien four in his 56-ball stay.

"Only two sessions may have been possible at Grace Road - though that was two more than some forecasts had suggested would be possible - but they were enough for Leicestershire to confirm that they are a much stronger outfit this season.

"Last season losing three top order wickets for 20 runs would have probably resulted in the Foxes being quickly bowled out for under 200, but Josh Cobb and Niall O'Brien led the recovery, with power to add.

"Glamorgan haven't been helped by dropping Leicestershire's stand-in captain Cobb three times, and they're clearly badly missing paceman Michael Hogan, now back in Australia to attend the birth of his second child.

"This is a good early season pitch, and after being put in, the Foxes will be looking to take their first innings score to 400-plus."