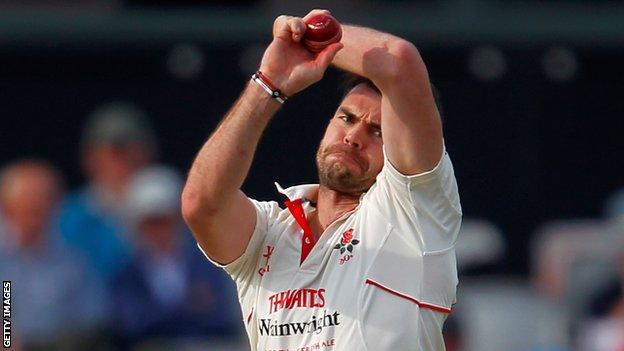 Fast bowlers dominated as a total of 18 wickets fell on the opening day of Northants' clash with Lancashire at Wantage Road.

After being put into bat in gloomy conditions, Lancashire were skittled for just 119, Steven Crook and Azharullah taking three wickets each.

But the hosts also struggled with the swing as they slumped to 133-8.

England's James Anderson took 5-37, but Matt Spriegel, coming in at four, was unbeaten at the close of play on 43.

Earlier in the day, on the back of scores of 83 and 84 in Lancashire's last game against Warwickshire, opener Paul Horton could not continue his good form, edging Azharullah to Andrew Hall at first slip without scoring.

Stone then sent Luis Reece's off-stump cartwheeling before Ashwell Prince was trapped in front by Crook and Andrea Agathangelou chopped on to leave the visitors reeling at 24-4 off 22 overs at lunch.

Anderson on song for Lancs

England one-day wicketkeeper Jos Buttler failed to inject some much needed impetus into the innings when he nicked Stone behind just two balls after the break and Tom Smith went soon after as Lancashire were reduced to 33-6.

Luke Procter (22) and Lancashire's new player-coach Glen Chapple (26), provided some resistance but, when both fell followed quickly by Kabir Ali to leave them 80-9, only a breezy last-wicket partnership of 39 between Simon Kerrigan and Anderson (28) saved Lancashire from total humiliation.

In their reply, last year's Division Two champions who were dismissed for just 94 first time around in their innings defeat at Yorkshire last week, were again left in trouble as Anderson utilised the overcast skies perfectly to take three early wickets while Chapple chipped in with two as Northants collapsed to 35-5.

But England Under-19 wicket-keeper, Ben Duckett, and Spriegel rebuilt the innings with a partnership of 57 before Duckett was removed by Simon Kerrigan for 35.

Anderson returned to the attack to remove Crook and David Murphy, both lbw, in successive overs to ensure it was honours just about even at the close of play.

"Who says county cricket is boring? This shows what a competitive top division the County Championship could have this season.

"There appears to be nothing wrong with the pitch but, when overhead conditions were cloudy, the movement in the air appeared to be prodigious, allied to Lancashire's top order failings.

"The 50 partnership between Ben Duckett and Matt Spriegel, who provided a particularly patient 43 off 121 balls, was vital for its patience and caution."

"With the sun setting at Wantage Road a remarkable days cricket ended with James Anderson leading Lancashire off the field after he top scored with the bat for the Red Rose and then took five wickets.

On a torrid day for the batsmen the Nortants lead of 14 with two wickets remaining already looks important.

Full credit to Lancashire for bowling their way back into the game. An entertaining last wicket stand between Anderson and Simon Kerrigan could also prove decisive.