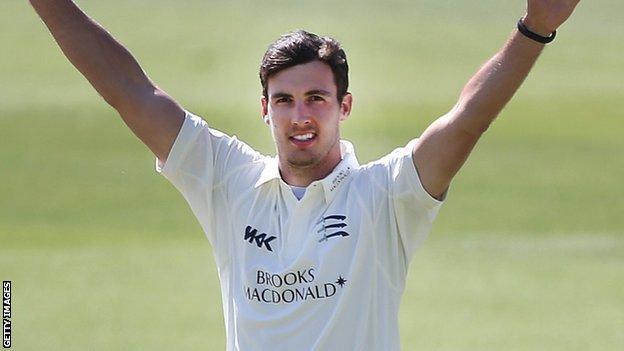 England's Steven Finn continued his fine start to the season with another four wickets as Yorkshire were bowled out cheaply by Middlesex at Lord's.

Joe Root, making his first-class return, was out for a duck to Finn.

Middlesex were 64-3 at the close, Dawid Malan top-scoring with 31.

Jack Brooks had nipped out both openers, reducing the home side to 20-2, but it was Finn who once again impressed and the fast bowler now has 19 wickets this season - the best tally in the country.

He had Adam Lyth caught behind before pinning Root in front for a five-ball duck, in his first match since scoring a one-day international century with a broken hand for England against West Indies in early March.

To accommodate Root's return, Yorkshire captain Andrew Gale dropped himself from the team.

Ryan Sidebottom and Steven Patterson were also removed by Finn after the former put on 48 for the eighth wicket with Plunkett.

"Two strong bowling attacks made the most of the overhead conditions to torment the batsmen all day at Lord's.

"Middlesex will be disappointed that Yorkshire recovered slightly from 113-7 with a fine half-century from Liam Plunkett and, with the weather set to continue along a similar pattern tomorrow, the question for the hosts is can one of their batsman register a half century or better to establish a first innings advantage.

"Eoin Morgan will hope he can improve his Test claims while fellow not out batsman Neil Dexter and next man in Joe Denly both have points to prove.

"However, Jack Brooks bowled the best spell of the day, picking up Chris Rogers and Sam Robson in the process, and the visitors will look to him to set the tone again in the morning."