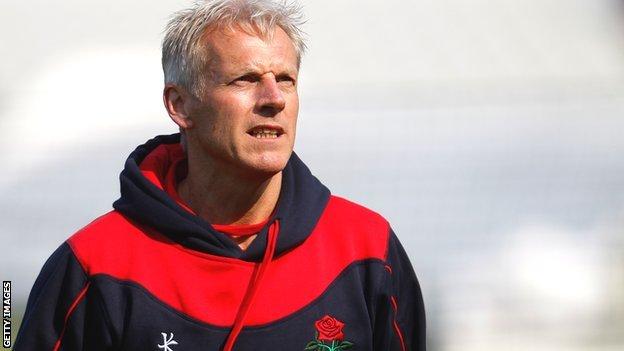 Peter Moores' final game as Lancashire coach ended in a draw with Warwickshire after an exciting final day at Old Trafford was cut short by bad light.

That left Warwickshire with a target of 120 to get after tea.

With the visitors on 95-5 requiring 25 runs from 27 balls, failing light led to the umpires taking the players off.

Moores, 51, has been appointed England coach for a second time.

"It's been really nice to be here for one more game because I owe them a lot and its been a great partnership and I've really enjoyed being at Lancashire," he said.

"Everyone has said well done to me. We kept that separate before the game but now we can enjoy a few beers together. It's been a privilege to be part of a huge evolution at the club."

The game had looked destined for a draw after rain had stopped play until late on the third day.

The start of the final day did nothing to change that before Keith Barker took the wicket of Luis Reece for 11 when the hosts were on 49.

Andrea Agathangelou, Ashwell Prince and Luke Procter all then went in quick succession to leave Lancashire eight ahead with six wickets left.

Opener Horton, who had made 83 in the first innings, played patiently but fell 16 short of his century on this occasion when he was clean bowled by Jeetan Patel and his departure prompted a second Lancashire collapse.

The visitors made a steady start to their run chase, despite briefly being forced off for bad light, before Will Porterfield was caught by James Anderson off the bowling of Chapple.

Varun Chopra (50) and Javid (15) steadied the ship but they were ultimately to be left stranded.

"Warwickshire feel very sore about the way this game finished, having been denied in similar circumstances previously.

However, their director of cricket Dougie Brown accepts that their opponents played entirely within the rules, and the umpires applied the laws and regulations fairly. That acceptance doesn't lessen their frustration at missing out so narrowly, though.

"They will take heart from the way they played to set up the chance of victory, especially their bowling effort on the final day. Jeetan Patel was the most successful, and bowled with skill on a helpful pitch, but the seamers operated impressively as a unit, restraining Lancashire's batsmen and almost always threatening to take wickets."