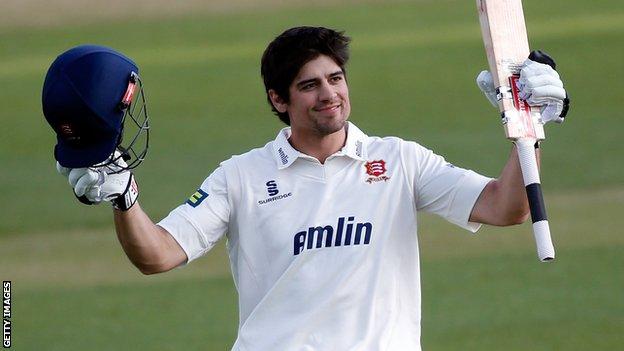 England captain Alastair Cook hit his second hundred of the new season as Essex batted out a draw with Surrey.

Cook followed last week's 181 against Derbyshire with 19 fours in a score of 127 before being bowled by Rory Burns.

Earlier, Surrey were all out for 237, losing their last three wickets for 20 runs as paceman Tymal Mills took 4-45.

However, James Foster opted not to set Surrey a target and the game ended when he declared on 258-4, with Essex 327 runs ahead.

The home side only lasted 4.1 overs in the morning, with Zafar Ansari unable to bat after suffering concussion earlier in the game when he slid head-first into a boundary fence.

Essex began their second innings with a 69-run lead and although Matt Dunn had Jaik Mickleburgh caught at first slip for 20, Cook was not in the mood to waste another opportunity, having fallen for 39 in the first innings when he top-edged an attempted pull.

He added 78 with Tom Westley, who was eventually bowled for 42 offering no stroke to an angled ball from Jade Dernbach, and then 101 with Ravi Bopara.

Teenager Dominic Sibley claimed his maiden first-class scalp with a ball that hurried onto Bopara and bowled him and Cook followed, having faced 202 deliveries in a stay of just over four hours at the crease.

"The most important thing for me personally is that I'm hitting the ball quite nicely," said Cook.

"Despite polishing off the Surrey innings in 25 deliveries at the start of the day, Essex eschewed the opportunity to go for the win, much to the surprise and disappointment of a good crowd at The Oval.

"Tymal Mills has added accuracy and guile to his intimidating pace this season and proved to be a considerable handful for the hosts' tailenders.

"Essex displayed admirable enterprise as they set about the Surrey attack but, unfathomably, in the afternoon sun it became increasingly apparent that batting practice was the extent of their ambitions. It was a relief to all when the captains shook hands at 4.50pm."