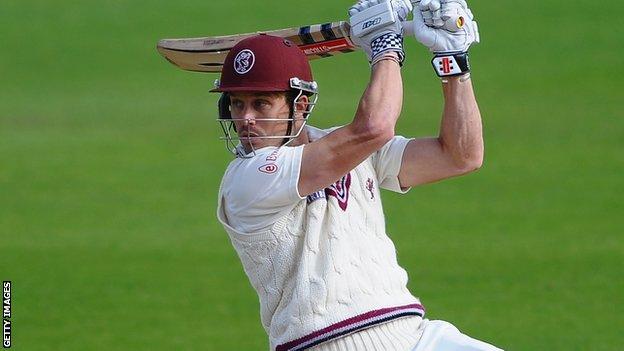 Somerset batsman Nick Compton reminded England's selectors of his ability with an unbeaten 100 to secure a draw against Durham at Chester-le-Street.

The home side declared on 213-9, with skipper Paul Collingwood on 52 not out, leaving a target for Somerset of 337.

Marcus Trescothick and Chris Jones fell early, and when Alviro Petersen and James Hildreth followed it was 92-4.

This was the sixth draw in seven matches between Durham and Somerset at Chester-le-Street, and it is not since 1997 that the visitors have left the North East victorious in a Championship game.

But Craig Kieswetter, dropped on nine, made 78 not out as he and Compton saw Somerset to safety on 246-4.

They shared an unbroken partnership of 154 and Compton's knock could hardly have been more timely with Peter Moores about to take over as England new head coach ahead of summer Test series against Sri Lanka and India.

The 30-year-old, who played the last of his nine Tests against New Zealand last summer, was his normal watchful self, but also played some impressive strokes that brought him 14 boundaries on the way to his 21st first-class century.

"It was a brilliant knock. Getting a hundred here at the Riverside is always tough, but he has been struggling with a neck injury for the last few days," said Somerset skipper Marcus Trescothick.

"We have done everything we can. Our medical team has worked tirelessly to get him back in the position because we can see what he can do, we know what kind of players he is - a world-class player - when he gets into that environment."

Somerset were sweating early in their chase after Chris Rushworth trapped Trescothick and Jones cheaply.

The visitors managed to fend off the threat of Graham Onions, who went wicketless in 18 overs, but Usman Arshad dismissed Petersen (23) and Hildreth in quick succession to reignite Durham's hopes of forcing a victory.

But Kieswetter showed that he could mix brawn - he hit seven fours and two sixes - with solid defence, making full use of the life granted to him when Scott Borthwick spilled a chance in the slips off Onions, who finished with 0-73.

"You can see what two international-class batsmen can do on a pitch where it's pretty flat, there's no turn and there's no swing," said home captain Collingwood.

"We are putting teams under pressure for long periods, but we are just not quite finishing them off."

"A brave century from Somerset's Nick Compton saw this match to a draw with nine overs to go.

"Having been unable to bat at three in the first innings because of a frozen neck, he returned to his usual position for the second innings following a pain-killing injection.

"He and Craig Kieswetter shared a partnership of 154 for the fifth wicket before the sides shook hands, Kieswetter making 78 after earlier being dropped.

"That chance to Scott Borthwick off Graham Onions may have made the difference as Somerset would have fallen to 115-5, but players do not drop catches deliberately."