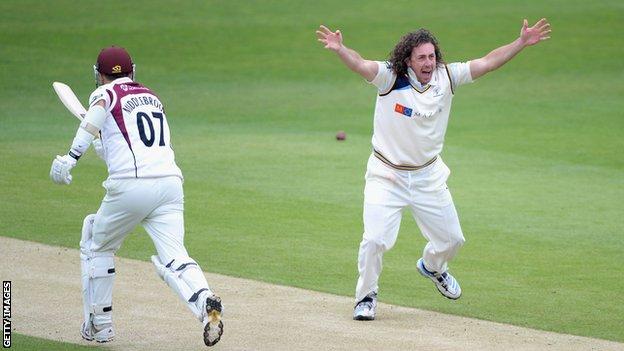 Maurice Chambers survived 15 dots as nightwatchman to reach stumps alongside Rob Newton (11 not out), leaving the visitors a tough final day.

But those late strikes can only place Yorkshire moderately in control of their own destiny with just 49 overs played on day three, and Wednesday's forecast not dissimilar.

The weather meant a shortened second day, with the visitors left to stew overnight after being skittled, and Tykes skipper Andrew Gale unsurprisingly put them back in.

Opposite number Peters did not last long before edging Sidebottom behind, and after a rally, Coetzer fell in the same way.

A combination of stoic batting and weather interruptions meant it looked as though Yorkshire would have to settle for that, but the reintroduction of Brooks, day two's star, saw Spriegel trapped in front and Middlebrook become wicketkeeper Andy Hodd's third catch of innings.

"It would take something rather remarkable for Northants to avoid defeat in this game against the Championship title favourites.

"But James Middlebrook has set the example of selling your wicket dearly which all have followed so far. One blemish, however, was the dismissal of Kyle Coetzer, who was visibly annoyed at himself to chase a wide one off Ryan Sidebottom after making a patient 39.

"Forty-five overs were lost in the day thanks to a mixture of rain and bad light, which helped Northants' cause. But weather will need to heavily intervene if Northants are to survive against a very powerful Yorkshire attack."