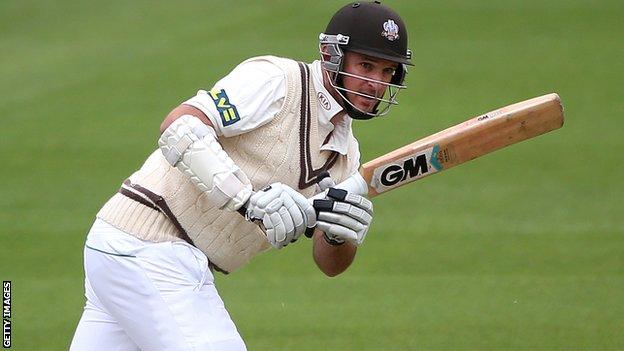 Skipper Graeme Smith hit his first half century of the season as Surrey responded to Essex's 306 all out with 217-6 on day three at The Oval.

The South African made 65 off 88 balls before becoming a 36th-birthday victim for seamer David Masters.

But the day's highlight was provided by Ravi Bopara, who brilliantly ran out Rory Burns with a back-handed flick after fielding off his own bowling.

Essex's innings was only the sixth instance of 10 players reaching double figures in the same Championship innings, without one of them making a half century.

It was the second time the 21-year-old had claimed five wickets in an innings and he rounded things off by having Monty Panesar caught by Stuart Meaker for 17.

Smith and Burns laid a solid foundation for Surrey in reply before the latter, on 16, was sent back by his partner after setting off for a single and was beaten by Bopara's stunning direct hit.

Dominic Sibley then helped add 77 for the second wicket before Smith, who brought up his fifty with two fours in the same Panesar over, fell two runs short of his highest score for the county when he edged Masters to third slip.

Jaik Mickleburgh was the catcher and he again showed a safe pair of hands to send Sibley on his way for 34 off the bowling of Tymal Mills, who also accounted for Steven Davies.

Spinner Panesar had Gary Wilson (18) taken at mid-on and then bowled Meaker (14) behind his legs, but Jason Roy was unbeaten on 30 at the close and with only one day remaining - and Surrey 89 runs behind - a draw seems the only likely result.

"There is still plenty of cricket left in this game as wickets in the final session meant Essex got their noses in front.

"Graeme Smith became the first batsman in the game to go past fifty, but after he fell to David Masters, four more quick wickets left Surrey wobbling.

"Jason Roy steadied the ship with an unbeaten 30 but they will start the final morning trailing by 89."

"Remarkably, after torrential overnight rain, only a little over half an hour's play was lost on the third day.

"The Essex tail wagged more effectively than is its wont to acquire three batting bonus points, but they bowled erratically as Surrey sailed to 156-2 shortly after tea.

"Essex were kept in the game by two outstanding feats of fielding, Bopara producing superb sleight of hand to run out Burns and Mickleburgh holding a sensational diving catch in the gully to dismiss Sibley.

"James Foster switched his bowlers shrewdly when bad light threatened an early finish and was rewarded for his enterprise when Panesar picked up a couple of wickets as Surrey declined to 186-6, still 120 behind, but they rallied to close on 217-6."