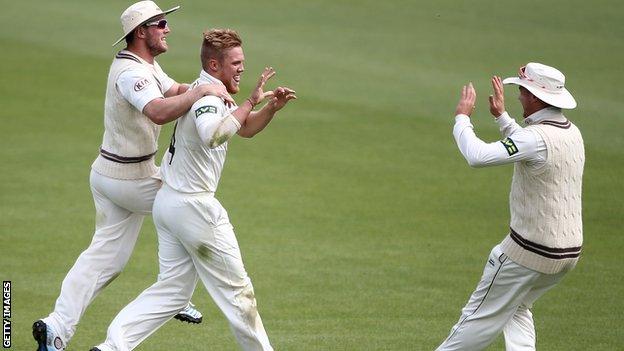 Novice paceman Matt Dunn included England captain Alastair Cook among his victims as Surrey restricted Essex to 225-6 on day two at The Oval.

After a first-day washout, Cook looked in decent nick, but top-edged a pull shot to the keeper and departed for 39.

Dunn, in his ninth first-class game, also removed Tom Westley and Greg Smith in the same over for figures of 3-53.

Ravi Bopara saw Essex to their first batting point, but was caught behind down the leg-side for 49 off Jason Roy.

It was a disappointing dismissal for Bopara, who still hopes to add to his 13 Test caps, and had shown discipline and restraint in an innings lasting over three hours, which followed a post-lunch rain interruption.

Captain James Foster was 19 not out when bad light finally ended play, with Graham Napier on four.

Surrey will decide on Tuesday morning whether Zafar Ansari is fit to take the field after being taken to hospital with suspected concussion.

He slid head first into the boundary fence and bowling coach Stuart Barnes said: " "I don't know what medically they prescribe when someone's had concussion, and I don't know how bad it was, so we'll just have to wait on that."

"There is still plenty of cricket left in this game.

"Essex have got their noses in front thanks to some excellent bowling late in the day.

"In the morning Matthew Dunn finished with deserved figures of 5-60 as Essex were all out for 306.

"Graeme Smith led the Surrey response and he was the first batsman to go past fifty in the game.

"But after tea he fell to David Masters for 65 and Tymal Mills and Monty Panesar then combined to take four quick wickets and leave Surrey wobbling at 186-6.

"Jason Roy steadied the ship finishing the day unbeaten on 30 and Surrey will start the final morning trailing by 89."

"After the day one washout, a further 18 overs were lost to a combination of rain and bad light on day two after Surrey won the toss and inserted the visitors.

"Cook and Jaik Mickleburgh sailed to a 50 partnership, the England captain in imperious form until top-edging a pull off the impressive Matthew Dunn, but thee batsmen failed to find much fluency after lunch on a pitch where all the first four got to 30, but only Ravi Bopara passed 40.

"Even he became utterly becalmed as he laboured to the day's top score of 49, while Stuart Meaker bowled an outstanding spell after tea.

"Earlier, there was a nasty injury to Zafar Ansari before lunch when he crashed head first into the fence in attempting to save a boundary. He was taken to hospital, but later discharged."