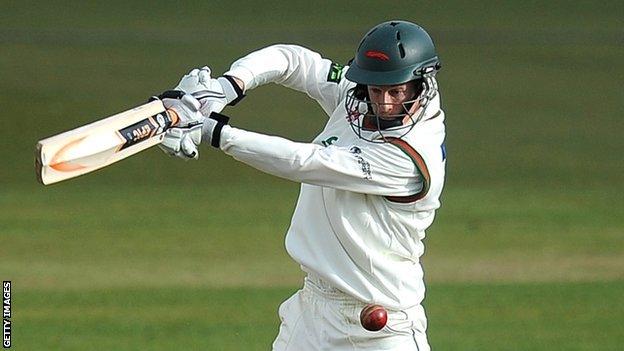 Anthony Ireland scored the first fifty of his career as Leicestershire's tail frustrated Kent to end day two of their game at Canterbury on 333-9.

Opener Matthew Boyce led the way with 68, but Kent seized the initiative as Darren Stevens (3-46) helped reduce his former county to 198-7.

Rob Taylor hit a quickfire 20 and Jigar Naik (41 not out) and Ireland put on 85 runs for the ninth wicket.

Ireland eventually fell to Adam Riley for 52, with the spinner claiming 3-52.

This was Leicestershire's first Championship outing this season following a first-day washout and the postponement of their opening Championship match.

"Kent will be disappointed to have let Leicestershire off the hook after working so hard in the afternoon session to wrestle back the initiative.

"The home side lacked a disciplined line and length to the taillenders on a pitch that offered help to the bowling side without ever doing anything too devious.

"Anthony Ireland's clean strokeplay, combined with Jigar Naik's mature, watchful knock mean Kent's chances of victory have all but evaporated after a single day of cricket.

"And injury worries to Robbie Joseph and Darren Stevens will not make them sleep any easier."