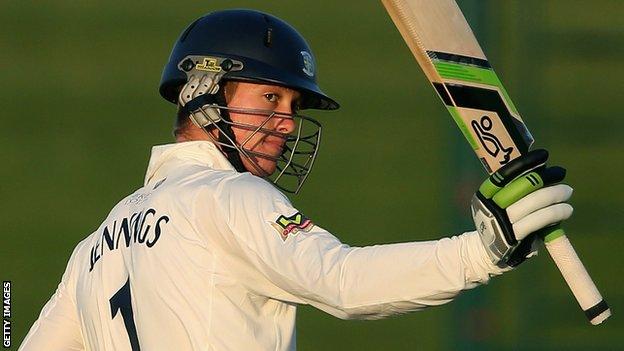 Keaton Jennings hit his second County Championship 50 of the season to help Durham post a competitive score on day one against Somerset.

Lewis Gregory did the damage with the ball for Somerset, taking four wickets.

Marcus Trescothick and Chris Jones then helped the visitors to 7-0 at stumps.

Somerset, who bolstered their attack with the returning Peter Trego following an arm injury, won the toss and elected to field first.

Gregory made early inroads when Mark Stoneman edged behind for 11 and Trego dismissed Scott Borthwick (14) in the same fashion.

Michael Richardson shared a partnership of 65 with Jennings before he fell to Jamie Overton for 29 and Phil Mustard made 19 before he was out lbw to Craig Meschede.

Skipper Collingwood's breezy innings was cut short when he was trapped in front by Gregory, who had Jennings caught by James Hildreth in his next over to leave Durham 222-6.

Usman Arshad was dismissed by Johann Myburgh shortly after, before Breese and Harrison helped last year's county champions past 300.

Trego returned to remove Breese and Graham Onions in the same over to finish with figures of 3-61 and Gregory wrapped up the innings with the wicket of Chris Rushworth to end with 4-59.

Trescothick and Jones then battled through six overs at the end without any alarm.

"I suppose it's honours even after day one.

"Durham made 308 from their first innings and Somerset survived six tricky overs at the end of the day intact. 308 is probably not a bad score, but time will tell.

"Durham unfortunately lost wickets in clusters, but Keaton Jennings was the pick of the batsmen with 80, while a late partnership of 65 from Gareth Breese and Jamie Harrison steered the hosts to their second and third batting points.

"There were also 32 extras, with 30 of them from no balls, something Somerset need to work on."