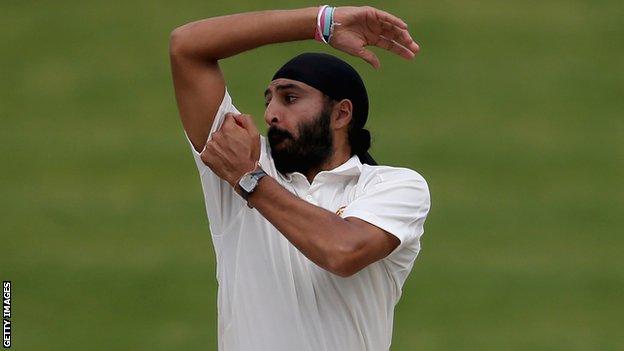 Essex began the new County Championship season with a 53-run victory over Derbyshire at Chelmsford.

Derbyshire, resuming 169 runs behind on 167-5, suffered an early blow when Shiv Chanderpaul (52) sent a fine edge to James Foster off Graham Napier (3-49).

Tim Groenewald (45 not out) and David Wainwright (52) kept alive their side's hopes of victory with a 89-run stand.

But after Wainwright fell to Monty Panesar (2-59), the visitors' tail faltered, and were soon out for 312.

The final wicket of Mark Footitt, taken by David Masters, completed a remarkable turnaround for the hosts, who looked unlikely victors after posting a first-innings total of just 94.

However, brilliant first-innings bowling from Masters (6-49) and 181 from England captain Alastair Cook in the second gave the hosts a solid base to build on, before Tymal Mills (3-49), Napier, and Panesar brought down Derbyshire's second innings.

"There are still plenty of areas to improve on, which is exciting for me.

"We were 94 not out and there are always going to be collapses in cricket. But the positions we were in we could have driven home and not given them any sniff of getting victory.

"But we've played one and won one. So I'm very pleased right now.

"I made it a challenge to start the season off well because we're notoriously very bad at that."

"If Essex thought they were home and dry once they had dismissed the obdurate Shivnarine Chanderpaul for 52, then they were quickly disabused of the notion by David Wainwright and Tim Groenewald who shared a stand of 89 off just 12 overs for the eighth wicket.

"This partnership included the sight of Groenewald hitting Monty Panesar for two consecutive straight sixes and then, a few overs later, bludgeoning the same bowler for two more sixes, one of which was last seen floating down the River Can heading for the North Sea.

"After four glorious days of sunny weather and a splendid cricket match in which the balance of power switched several times the home side's disciples left the ground with a spring in their step and joy in their hearts."