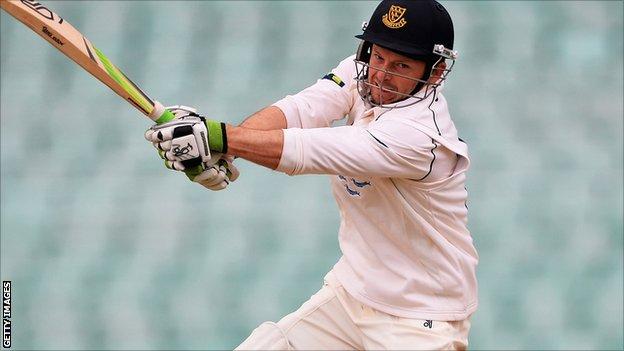 Sussex are on the verge of victory at Edgbaston, despite Ian Bell's unbeaten 189 for Warwickshire.

The Bears were eventually bowled out for 471, with Jeetan Patel hitting 74, although their first-innings total of 87 left them with a tough task.

Sussex closed on 273-2 with Ed Joyce unbeaten on 125 while opener Luke Wells (57) and Michael Yardy (28) were the two batsman to lose their wickets.

They require another 57 runs on day four with eight wickets remaining.

Joyce's ton came off 172 balls in 240 minutes with Rory Hamilton-Brown joining him at the crease and two shy of his half century.

"The match has been a tale of the two captains; Ed Joyce has made a hundred in each innings, and Ian Bell an undefeated 189.

"The batting of Joyce and Bell has been of the highest quality, but Bell's heroic effort will almost certainly be in vain baring a spectacular Sussex collapse.

"Sussex cricket manager Mark Robinson said that Joyce has been in a rich vein of form for some time, and that captaincy has galvanised his skipper giving him a new lease of life.

"Robinson also confirmed he has an interview with the England and Wales Cricket Board but wouldn't expand further on when or where that will take place."