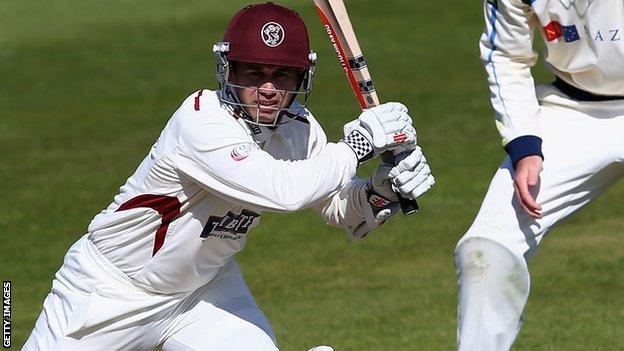 Johann Myburgh scored 91 on his debut as Somerset passed Yorkshire's imposing first-innings total of 450 on the third day at Taunton.

Resuming on 166-3, Alviro Petersen (24) and James Hildreth (67) both fell in the morning session with the hosts still 198 runs in arrears.

But Craig Kieswetter (63) and Myburgh shared 112, before the latter combined with Lewis Gregory, whose 69 was his best-ever score, to put on 100.

Craig Meschede hit an entertaining 45 not out from 50 deliveries to guide them through to stumps, with Craig Overton blocking his way to an unbeaten five at the other end.

It proved to be a day of toil for Yorkshire's bowlers, the Tykes having begun the morning with hopes of taking the last seven Somerset wickets in relatively quick time to force a positive result.

Liam Plunkett was the most successful with ball in hand, although his figures of 4-108 still came at more than four runs an over, while Kane Williamson's 2-45 was the next best.

Meanwhile, the only disappointment for the hosts will be that no batsman went on to reach treble figures, with five players passing 50 and three of the top four falling for scores of 20, 32 and 24 respectively.

South African Myburgh, 33, struck 10 fours in his 153-ball innings but was trapped in front by Adil Rashid just nine runs short of a century.

Gregory, meanwhile, hit 10 fours and two sixes in compiling his more aggressive 69 from 91 deliveries, in the process bettering his previous highest first-class score by 17 runs.

"A draw looks likely at Taunton and full marks to Somerset for some fine batting to establish a lead of 80 over Yorkshire in the first innings.

"Myburgh led the way with a polished 91. There were notable contributions from Hildreth 67, Gregory 69 and Kieswetter 63 too.

"Yorkshire had moments to cherish with four wickets for paceman Liam Plunkett. However, some chances went down and that will disappoint coach Jason Gillespie.

"A high-scoring draw is the favourite outcome."