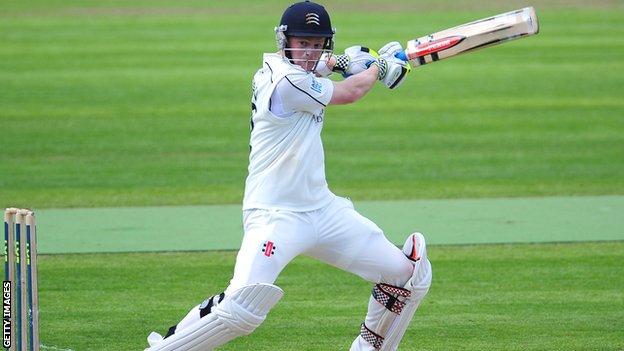 Earlier, the visitors added 11 to their day-one score to be dismissed for 326, with Steven Finn finishing with 5-91.

Notts resumed on 315-8 and quickly lost Andy Carter to Finn for eight, while Luke Fletcher (25) became Tim Murtagh's only wicket of the innings.

Fletcher then took two wickets in five balls to reduce Middlesex to 19-2 inside 10 overs.

Chris Rogers was caught by Samit Patel for 15 and Dawid Malan caught behind by Read for a four-ball duck.

But Robson and Morgan rebuilt the home side's innings, putting on 203 in 53 overs to allay any fears of another batting collapse, following two in last week's innings defeat by Sussex.

Morgan went to make his highest first-class score since his 104 for England in the third Test against India at Edgbaston in August 2011.

Robson hit 19 fours in his near six hours at the crease and put on an unbeaten 59-run fifth-wicket partnership with John Simpson (32 not out) to leave Middlesex in a strong position.

After scoring 40 with the bat on day one, Australian Peter Siddle was wicketless in 19 overs, conceding 70 runs, on his debut for Notts.

"Sam Robson added to a growing list of outstanding innings as Middlesex fought back strongly on day two.

"The opener gave the Test selectors a timely reminder of his talent as batted for the majority of the day.

"With the score on 19-2, the hosts found themselves under a fair deal of pressure following their capitulation at Hove last week.

"But Robson and Morgan batted with poise and determination to assume control of the day.

"Not a single chance was offered by Robson, which made his achievement all the more impressive against an attack led by Peter Siddle."