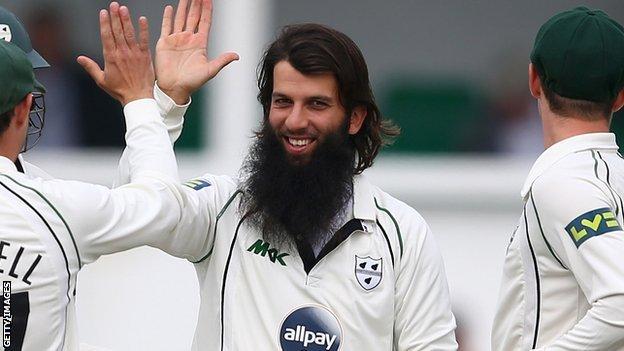 Worcestershire's Moeen Ali took three wickets as Kent gave up a promising start on the second day at New Road.

Kent lost their last six wickets for 62, with Gareth Andrew taking 4-42 to leave them all out for 229, a lead of just five.

Daryl Mitchell and Matt Pardoe helped the hosts close on 41-0.

"Matt Mason, the Worcestershire bowling coach, wore a broad smile after the close of play, declaring himself "very proud" of his bowlers' efforts - and you can understand why.

"What this slow-burner of a day lacked in peppered boundary boards, it made up for with grit and application from the batsmen and persistent discipline from those with ball in hand.

"Kent's reply crawled along at barely two runs per over for much of the day as Worcestershire's attack gave them nothing on a slow, low surface that always gave batsmen the impression they were taking their lives in their hands if they tried anything expansive.

"Daniel Bell-Drummond and Ben Harmison were the most glue-like with their respective half-centuries spanning more than seven hours in total, but Worcestershire's refusal to buckle kept the shackles on and allowed the home side to mop up the innings for a negligible deficit."

"Daniel Bell-Drummond's obdurate, three hour half-century showed a maturity that bodes well for his future and Kent's season. He showed a great deal of grit on a slow, low pitch only occasionally dipping into his huge bag of attacking shots.

"He was ably assisted by Ben Harmison who was at the crease for over four hours on a testing wicket - particularly outside the left-hander's off stump. It's a positive sign with the progress he made toward the end of 2013 has continuing into this campaign.

"Kent will be disquieted though, by the seeming ease with which the Worcestershire openers saw off their attack in the last overs of the day. They'll need to bowl well on the morning of day three to stay in the game."