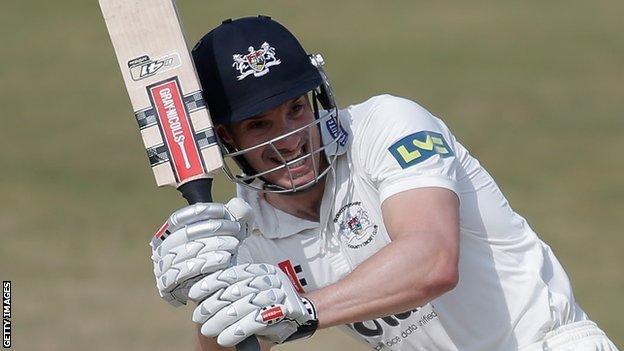 Hampshire, who elected to field, had made early inroads, with James Tomlinson getting his 300th first-class wicket when he clean bowled Chris Dent.

But Tavare (135no) reached his ton with a six off Liam Dawson, having shared a 163-run stand with Michael Klinger.

Kyle Abbott had Klinger (85) and Alex Gidman (0) caught behind just before tea as the hosts ended the day 292-5.

In the second over after tea, Tomlinson had Hamish Marshall caught behind as Gloucestershire lost three wickets for six runs.

However, Tavare kept his head and finished the day still at the crease, having hit 19 fours and two sixes, but Will Gidman, who batted well across the crease, hit 55 off 100 balls before falling to Sean Ervine a couple of overs before the close of play.

"A century on championship debut for Will Tavare was the highlight of the opening day.

"Tavare came in with Gloucestershire at 17 for 1 having lost Dent early on. He then batted throughout the rest of the day finishing on 135 not out, with a stand of 163 alongside Michael Klinger rescuing the home side after Hampshire had put them in on a pitch that offered early movement.

"Tavare is the nephew of Chris. His uncle was famed for his obduracy and he must have smiled when Will brought up his three figures with a six over the long on boundary.

"Hampshire didn't bowl badly, and they will rue dropping Tavare twice early on."