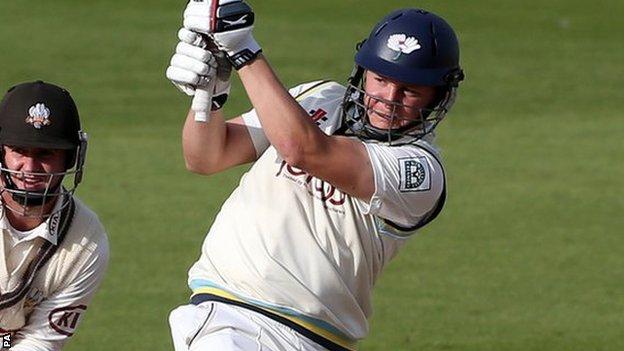 Gary Ballance hit an assured 77 for Yorkshire in their Division One game at Somerset to boost his England hopes.

The visitors were put into bat and saw Adam Lyth, dropped by Craig Kieswetter on 70, make 85 before going to a diving catch at mid-on by Lewis Gregory.

Yorkshire made the most of a glorious day with Ballance, who made his Test debut in this winter's Ashes in Australia, sharing a 115-run fifth wicket stand with Rashid.

After Ballance was given out lbw to Gregory, Rashid continued to send the ball to the boundary, finding it 14 times in total, and finished the day with wicket-keeper Andy Hodd (22 not out).

"This was very much Yorkshire's day. At 342-5, they are in the box seat, with a fifth batting bonus point well within reach, thanks to a stylish 85 from Adam Lyth, an assured 77 from Gary Balance and a typically wristy 84 not out by Adil Rashid.

"Marcus Trescothick's decision to put Yorkshire in was understandable on a pitch with a hint of green about it, but - the persevering Craig Meschede apart - the inexperienced Somerset bowling line-up never found a consistent enough line to take advantage of it, and at least three dropped catches didn't help."