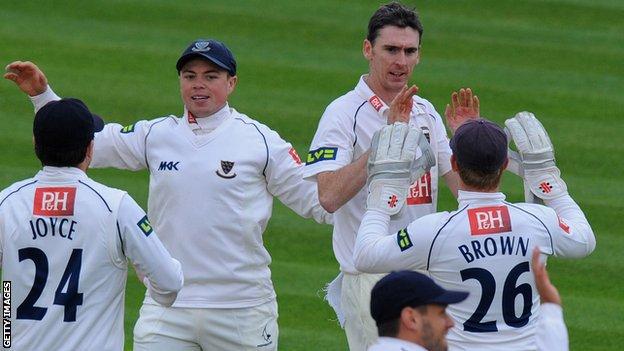 Middlesex lost their last nine wickets for 65 runs as they collapsed to an innings-and-127-run defeat by Sussex.

But the loss of Rogers to James Anyon (3-67) sparked a spectacular Middlesex collapse, Steve Magoffin taking 5-56 as the visitors succumbed to 154 all out.

England Test hopeful Eoin Morgan again failed with the bat, following up his first-innings duck with only two.

Dublin-born Morgan, 27, who turned down the chance to play in the Indian Premier League in order to make himself available for Middlesex in the County Championship, was once more unable to make an impression as he looks to force his way back into the England Test set-up.

Sussex and England wicketkeeper Matt Prior enjoyed a much happier return to the four-day game on day three, striking an impressive 125 to set up victory.

The 32-year-old, dropped by England for the final two Tests of the 5-0 Ashes whitewash in Australia, hit 19 fours and one six in compiling his first century in first-class cricket since his match-saving effort against New Zealand in Auckland just over a year ago.

But the final day belonged to the Sussex bowlers, who tore through the Middlesex batting order, with eight wickets falling for just 33 runs in an 11-over spell during the morning session.

Only some late fireworks from tail-ender Steven Finn, who followed up his 6-80 with the ball with 26 off 22 deliveries, stemmed the flow of wickets before the hosts wrapped up victory just before lunch.

To compound their misery, Middlesex were deducted two points for a slow over-rate.

"A convincing and thoroughly deserved win for Sussex, showing the strength of their squad, opener Chris Nash, all-rounder Luke Wright and opening bowler Chris Jordan having all missed this match.

"Jon Lewis may prove yet another shrewd acquisition by coach Mark Robinson. His four first-innings wickets showed that the 38-year-old still has plenty to offer at Championship level.

"With younger players Matt Machan and wicketkeeper Ben Brown both making significant contributions with the bat, Sussex seem to have a good blend of experience and youth which augers well for the season

"However, the high-class innings from Matt Prior changed the course of this match. Had he been caught when he had scored just 10 the result may not have been so clear-cut.

"For all that, Middlesex have been totally outplayed, and Sussex now head to Edgbaston - a ground where they have a dreadful recent record - in good heart."