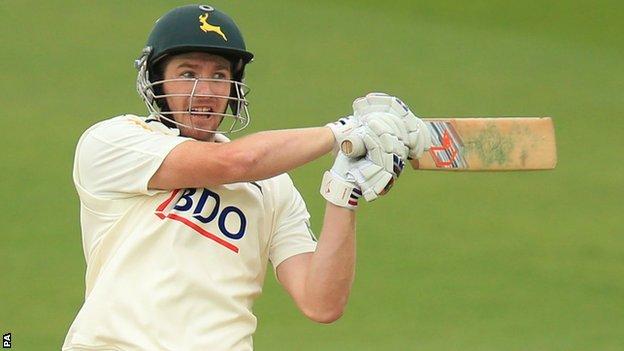 Nottinghamshire look handily placed to beat Lancashire despite being bowled out inside two sessions for 220 in their second innings at Trent Bridge.

Resuming on 77-6, Tom Smith (42no) helped Lancashire avoid the follow-on before being bowled out for 144.

Despite a superb 90 from Riki Wessels, Notts then lost wickets themselves, medium-pacer Smith taking 5-52.

That set Lancashire 349 to win, but the visitors were already in trouble by the close on 7-1, losing Luis Reece.

Luke Fletcher, who came on to claim the final two scalps in successive balls to finish with 3-15, Andy Carter (2-25) and Harry Gurney (2-41) took the last four wickets in the morning session as Lancashire were bowled out on the stroke of lunch.

Kabir Ali then claimed the first three Notts wickets, finishing with 3-29, for match figures of 6-95, before Wessels bedded in to help the home side take command.

But, working in tandem, Smith and England paceman Jimmy Anderson engineered Notts' slump from 188-3 to 210 all out.

Smith made a double breakthrough, removing Michael Lumb for 38, then his ICC World Twenty20 opening partner Alex Hales for a fourth-ball duck.

But, following on from his first-day haul of 5-54, Anderson proved dangerous too.

In his first game since returning from the disastrous winter Ashes tour, England's all-time top international wicket-taker came back late on to claim the prizes of Wessels and Carter for a seven-wicket match haul.

"If every Championship match in 2014 is as thrilling as this one has been, then this is going to be a golden summer.

"Exhilarating strokeplay, superb seam bowling and exploding stumps. This was a day which delivered 15 wickets and so much more.

"With the competition for places so intense at Trent Bridge, Riki Wessels stepped up to the mark with an innings of sublime quality.

"His runs, scored at the pace they came, put Notts very much in the driving seat and they must now be fancied to pick up the first win of the season."

"An enthralling day's cricket at Trent Bridge with just about something for everyone, with wickets falling, stumps uprooted, excellent batting and some impressive catching.

"But Lancashire are up against it going into the final day, knowing that they will need to bat well in order to get anything from the game.

"They can take heart from Tom Smith's performance with the bat this morning, his unbeaten 42 the stand-out performance on the Lancashire card, on what proved to be a good day for him personally.

"His five second-innings wickets were reward for all his hard work during the first innings where he arguably bowled better but for no return."