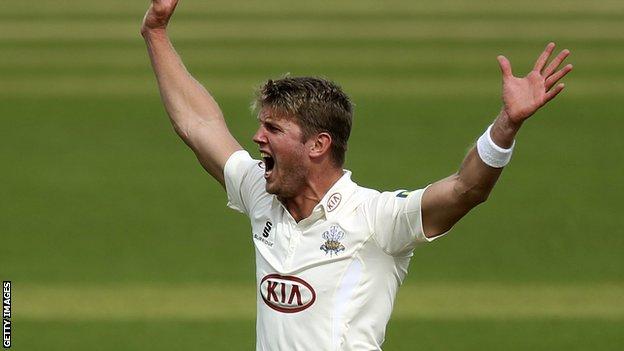 Surrey's first match since relegation to Division Two looks likely to end in a draw against Glamorgan at The Oval.

After the hosts were all out for 280, Zafar Ansari top-scoring with 74, Glamorgan struggled early on.

Stuart Meaker, who missed much of last season with a knee injury, was the visitors' chief tormentor with 4-57.

Jim Allenby's 52 steadied the Glamorgan cause but, after he was caught in the slips, they succumbed to 209, before Surrey closed on 50-2, a lead of 121.

They may look to force a Glamorgan run-chase if they can a big enough lead on the final day.

But they will have to do it without former South Africa Test captain Graeme Smith, who fell to Graham Wagg for just 18.

"A cracking day of Championship cricket sees Surrey with their noses in front, Stuart Meaker having led the Surrey attack with 4-57.

"It could have been much worse for the visitors without Jim Allenby's experienced 52.

"The best bit of news is that the sun may be turning up in South London as well."