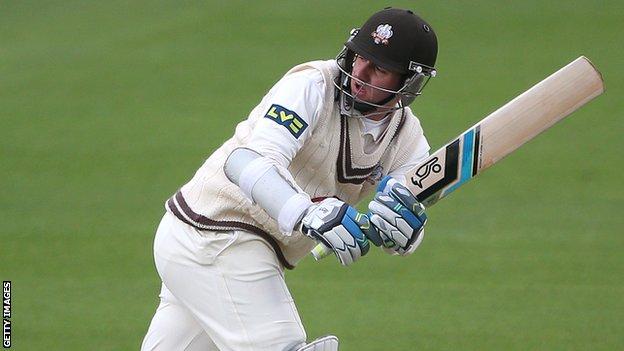 Steven Davies and Zafar Ansari both hit fifties as they shared a century partnership to help Surrey recover from a poor start against Glamorgan.

The pair came together at 34-3 after the hosts lost three quick wickets, including captain Graeme Smith for 19.

Keeper Davies made 67 and 22-year-old Ansari struck an unbeaten 50 as they put on 122 for the fourth wicket.

Smith, who only made three County Championship appearances for Surrey last year before ankle surgery ended his season in May, was trapped in front by Graham Wagg following a frantic 10-minute spell, which also saw Rory Burns and teenager Dominic Sibley fall for 10 and nought respectively without a single run added.

After Davies edged Hogan behind, Gary Wilson quickly joined him back in the pavilion for just one before Jason Roy (10 not out) saw it through to the close with Ansari.