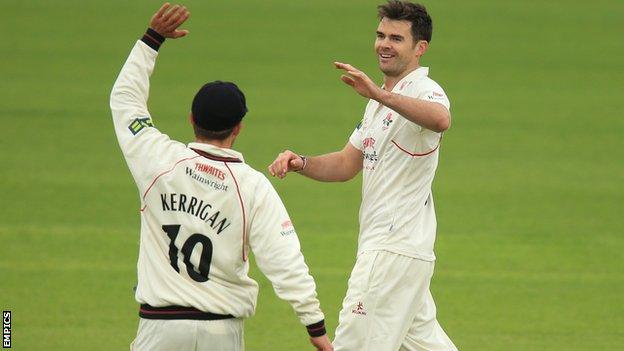 England paceman James Anderson began his build-up for this summer's Tests by taking 5-54 for Lancashire on the opening day of the new county season.

Samit Patel made a resolute 93, and shared a stand of 95 with England T20 opener Alex Hales, batting at six.

Anderson had Hales caught at slip for 61 with the second new ball as Notts ended the opening day's play on 270-9.

Having won the Division Two title last summer with the help of a combined total of 113 wickets from Glen Chapple and Kyle Hogg, Lancashire began their top-flight campaign without either of them because of injuries.

However Anderson, despite his struggles in Australia over the winter, was a high-calibre replacement and shared the new ball with Kabir Ali, who marked his first Championship appearance for the county by yorking Steven Mullaney in his third over.

Anderson then had Jaques caught at slip and bowled Lumb off the edge as he tried to leave the ball alone, before returning after lunch to end a stand of 85 between Patel and Wessels by knocking two stumps out of the ground to send the latter on his way for 39.

Lancashire had to wait 30 overs for their next success when Patel, after hitting a six and 12 fours, gloved a leg-side catch to the keeper off Wayne White, who then flattened Chris Read's off stump shortly after dropping a return chance offered by the same batsman.

Anderson returned in the final session to bowl Luke Fletcher and, although Hales surpassed his highest four-day score of last season - 58 - with the help of 11 fours, he was caught at first slip in his next over, before Kabir bowled Jake Ball and bad light ended play in the 87th over.

"Being described as a former England international is sure to bring the best out of Samit Patel, as he honestly believes he has it in him to return to the highest level of the game.

"His duel with James Anderson was compelling stuff throughout and a score of 93 in testing April conditions, against a swinging ball, was testament to Patel's ability. He still has much to offer England - as does Alex Hales.

"In an unfamiliar middle-order role, Hales shunned his usual cavalier style to dig in and make occupation of the crease his primary objective and a half century on the opening day will do wonders for his self-belief and confidence after a disappointing 2013.

"Thank heavens for the floodlights. On throughout, the fare was as gripping as we are likely to see all summer."

"James Anderson had not played a competitive game since the Ashes in Australia but, refreshed after pre-season with his county team-mates, he was back to his most skilful best, roaring in and causing chaos with the new ball.

"A great spell of bowling in the morning and evening sessions was just the tonic for Lancashire following an afternoon fightback from the home side.

"The pick of the wickets for Anderson was the eye-catching dismissal of Wessels for 39, emphatically bowled with middle and off stumps sent cartwheeling to various parts of Trent Bridge."