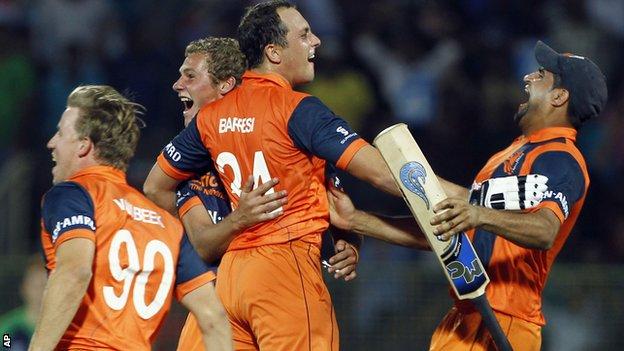 The Netherlands have made it into the Super 10 stage of the World Twenty20 after an extraordinary victory over Ireland in Sylhet.

The Dutch smashed 19 sixes as they scored 193 off just 13.5 overs to progress ahead of the Irish and Zimbabwe on a superior run rate.

Ireland, who would have qualified by winning Friday's game, made 189-4.

Stephan Myburgh smashed the second fastest 50 in Twenty20s to launch the Netherlands towards a stunning victory.

Myburgh struck 63 off 23 balls, hitting four boundaries, before Wasely Barresi, who was 40 not out off 22 balls, lofted a final six over deep mid-wicket to seal the win inside the required run-rate.

The Netherlands will now be in Group One with Sri Lanka, England, South Africa and New Zealand.

That kept their hopes alive but ultimately they were denied by a remarkable batting display by the Netherlands.

For Ireland, it was a massive setback after winning the qualifying tournament and coming out on top in their two games against Zimbabwe and the UAE.

After Ireland's innings, the Dutch knew they had to chase down the sizeable target of 190 to qualify.

They went for broke, blasting more than 15 runs per over in an exhilarating match.

Twice, Myburgh hit three successive sixes. He and captain Peter Borren, a sedate 31 off 25, opened the chase with 91 after six overs.

Myburgh brought up his 50 off 17 balls to emulate Ireland's Paul Stirling against Afghanistan in 2012.

India's Yuvraj Singh holds the record with a 12 ball-50 against England in the inaugural World Twenty20 in 2007.

Tom Cooper picked up after Myburgh departed by whacking four straight sixes before he was out for 45 off 15 balls.

Barresi, 40 not out off 22 balls, finished off the Irish with dot-6-dot-4 and a final six over deep mid-wicket to seal the deal in unbelievable fashion.

For Ireland, Andrew Poynter hit 57, skipper William Porterfield 47, and Kevin O'Brien was not out on 42.