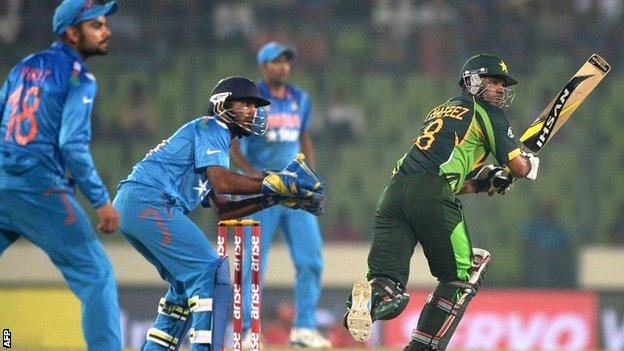 The ICC World Twenty20 enters the Super 10 phase on Friday with an eagerly awaited contest between rivals and former winners India and Pakistan.

They are in Group 2 with defending champions West Indies, Australia and Group A qualifiers Bangladesh.

England, the 2010 champions, begin their Group 1 campaign against New Zealand in Chittagong on Sunday.

Sri Lanka and South Africa are also in the group, with Ireland seeking to join them by qualifying from Group B.

The Irish team have secured victories against Zimbabwe and the United Arab Emirates to lead their qualifying group on four points and could go through even if they are beaten on Friday by the Netherlands, who, like Zimbabwe, have two points from their first two matches.

When England won the tournament in the Caribbean in 2010 their leading run-scorer was Kevin Pietersen, who was told last month he would no longer be part of the national team set-up.

Stuart Broad's team, who have lost seven of their last eight matches, including warm-up defeats against West Indies and India, are also without the injured Joe Root and Ben Stokes for the event.

Despite having never beaten India in the competition, Pakistan have a superior World T20 record to India, having qualified for the semi-finals in all four editions and won the tournament in 2009 in England after being runners-up in the inaugural event.

India have not reached the semi-finals since taking the title in 2007, but have lost only once in five T20 internationals against Pakistan.

West Indies, who beat hosts Sri Lanka in the 2012 final, defeated England 2-1 in their series in Barbados earlier this month when star opener Chris Gayle returned from injury, and the cavalier left-hander has made 1,096 T20 runs in 37 internationals, with 10 fifties and one century.

Sri Lanka are the top-ranked T20 international side, and they have spent more than six weeks in Bangladesh conditions, winning the 50-over Asia Cup there earlier this month with a five-wicket victory against Pakistan.

Australia, who begin against Pakistan on Monday, are yet to win the World T20 title and have opted for experience in their squad with the inclusion of 39-year-old batsman Brad Hodge and 43-year-old spinner Brad Hogg, but fast bowler Mitchell Johnson is out with an infected toe.

The top two teams in each group contest the semi-finals on 3 and 4 April, with the final in Mirpur on 6 April.