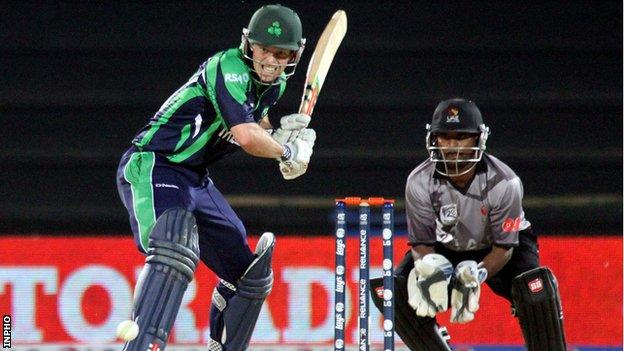 Ireland made it two wins from two World Twenty20 games after beating United Arab Emirates by 21 runs on the Duckworth/Lewis method to top Group B.

UAE posted a modest 123-6 before Ireland opener Paul Stirling retired hurt after being struck on an elbow.

The Irish were 95-0 but lost three quick wickets before two floodlight failures and rain ended the game with Ireland needing 21 runs from 34 balls.

Ireland will reach the Super 10 stage if they beat the Netherlands on Friday.

UAE made a good start and were 31-0 from three overs before the wickets began to tumble.

Stirling and Kevin O'Brien each took two wickets as the UAE could only muster 125 from their 20 overs.

Middlesex batsman Stirling was hit by a lifting delivery from Asadullah Shareef in the second ball of the Irish innings.

He scored eight runs before retiring hurt with a subsequent scan revealing tissue damage and no break.

Ireland continued to plunder the UAE bowling with Ed Joyce (43) and William Porterfield (33) putting on a stand of 80.

However, Ireland slipped from 95-0 to 101-3 to give UAE hope but the delays for floodlight failure, followed by rain, ensured the match came to a premature end, and ended the UAE's hopes of reaching the Super 10 stage.

In Wednesday's other Group B game, Zimbabwe's Vusi Sibanda held his nerve to hit a match-winning six off the last ball to secure a five-wicket victory over the Netherlands in Sylhet.

The Dutch made a decent total of 140-5 having chosen to bat first, a significant turnaround from a position of 35-4 in the fifth over.

Zimbabwe looked to be cruising at 87-1 but the scores were tied when Sibanda thrashed Ahsan Malik over long-on for a last-ball win.

The result leaves both sides with one win from two games and trailing Ireland going into Friday's final games.