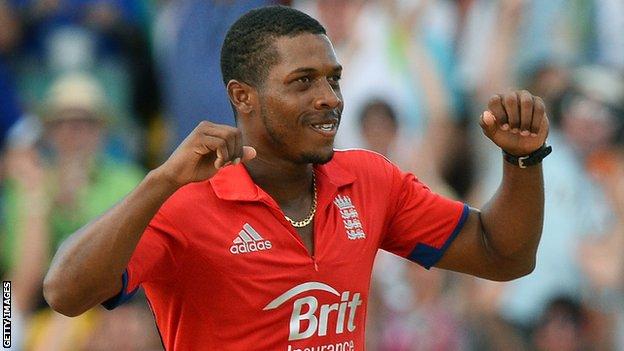 Last week, in only his second Twenty20 international for his adopted country, Jordan returned to his boyhood home to deliver the perfect all-round performance against West Indies.

The 25-year-old, who qualifies to play for England through his grandmother, cracked 27 runs off nine balls to rescue a flagging batting display, took three important wickets and held on to a breathtaking one-handed catch on the boundary to inspire the team to their first victory in six T20 games.

With Graeme Swann calling Jordan a "superhero" on Test Match Special and captain Eoin Morgan hailing an "outstanding effort" from the first ball to the last, England fans heading to Bangladesh for the World Twenty20 can suddenly see a glint of daylight through the gloom.

Jordan's journey from the Caribbean to Chittagong - where England begin their campaign against New Zealand on Saturday - started at Combermere High School in Bridgetown where he studied alongside a would-be global singing phenomenon.

"I remember Rihanna well," Jordan said recently. "I guess she was always a good singer at school. I like her songs very much and they're on my iPod, but I don't think she has much interest in cricket.

"When I go back to Barbados we see each other and stuff. She's a very humble girl and I'm just glad everything worked out well for her."

Whenever the Windies were in town, Jordan would head down to the Kensington Oval to watch his fast-bowling idols Curtly Ambrose and Courtney Walsh. During intervals, he and his friends would play their own games on the outfield and help batsmen like Lara warm up for their innings.

His own talent was spotted as a 16-year-old by former England batsman Bill Athey in 2005. Athey taught cricket at Dulwich College in south London and was in Barbados looking for a talented local youngster to take up a scholarship at the school. As soon as he saw Jordan play, he knew he had struck gold.

"Once you saw him bat and bowl for an hour or two, anyone who knows anything about cricket would know he had real potential," Athey tells BBC Sport.

"He's just a natural cricketer and a natural athlete. He bowled at a lively pace. He could bat, his fielding was sharp and he had good hands.

"He was a good, polite young lad and was academically strong enough to come to the school in England, so we brought him to Dulwich the following year."

Jordan was an instant hit in the school's football and basketball teams, but it was on the impeccably manicured cricket fields of southern English public schools that he made his biggest impact.

"He was one of the best performers on the whole circuit," adds Athey, who played 23 Tests and 31 one-day internationals.

"He bowled quickly in nearly all the games and was a real handful to face."

Aware that he had a rare talent on his hands, Athey alerted the nearest county side, Surrey, who invited him for trials. A handful of net sessions later and Jordan was in the first team.

"He was the best young cricketer I had seen since [Surrey and England batsman] Graham Thorpe," says former England captain Alec Stewart, who was a Surrey ambassador at the time.

"They were different types of cricketers but you could tell Thorpey was going to be something very special and the same went for Jordan.

"At the time I was asked for my five to watch for the future and I said Jordan would go on to play international cricket."

Jordan made his Surrey debut as an 18-year-old in 2007 and took an impressive 20 wickets at 24.50 in his first season. But it was during the following year that he developed the injury that almost derailed his career.

A persistent back problem that inhibited his bowling was initially misdiagnosed, leading some at Surrey to question whether he was capable of playing through niggles. When scans eventually revealed a stress fracture, he was ruled out of the entire 2010 season.

On his comeback the following year, Jordan showed his potential with the bat by striking two fifties, but a lack of success with the ball led to the club deciding to release him at the end of 2012. On the eve of his 24th birthday, Jordan was facing the scrapheap.

"I'd fought to keep him on the staff for the 2012 season because I knew he had so much potential, but because his stats in 2012 weren't great, as much as I wanted to keep him I couldn't defend him any more," adds Stewart.

"I rang around some counties and urged them to take him. I told them this guy is too good to be out of the game."

It was Sussex who decided to take a gamble on Jordan, having noted his potential in second XI games and got the lowdown on his character from Rory Hamilton-Brown, another recent arrival from Surrey.

Any notion that the county might be taking a gamble was dispelled in an instant as Jordan took a career-best 6-48 on his Championship debut against Yorkshire.

"In the early weeks, I kept thinking there must be a catch here if Surrey let him go," says Sussex coach Mark Robinson.

"Normally when someone is released, there is something wrong physically, technically or mentally, but as a bowler, a fielder and a person he was wonderful."

Bowling with pace and menace, and catching everything that came his way at slip, Jordan played 14 Championship matches for Sussex and took 59 wickets at 26.73, while also posting his highest score of 92 against Derbyshire in May.

He also took 11 wickets at 22.18 in six YB40 matches, although an economy rate of 6.02 reflected his occasional tendency to let things slip at the end of the innings.

"He's not the finished article, but you wouldn't expect him to be at 25," adds Robinson. "He's a great talent who has used injuries and setbacks to make him stronger and more self-reliant."

Jordan's Sussex success led to an England debut in the fifth one-day international against Australia in September, followed by selection in the limited-overs squad for the return series down under.

He played in all five one-day internationals in Australia, chipping in with regular wickets and showing remarkable reflexes in the field. One catch to pluck a full-blooded David Warner drive out of the air with his outstretched right hand must have felt like a shot in the arm to weary England fans at the end of a miserable tour.

Nine years after he was spotted by Athey, and only 18 months after his Surrey rejection, Jordan is poised to play in his first global tournament - and Stewart is expecting the all-rounder's rapid rise to continue.

"He will only get better and better," he says. "I'd be very surprised if we didn't see him wearing an England Test shirt this summer because he's got the lot."