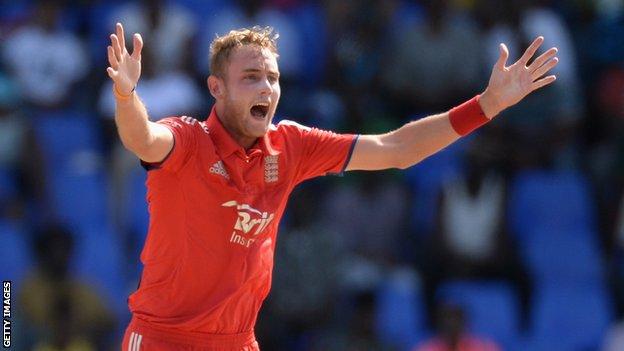 England captain Stuart Broad insists he will be fit to play a "full part" in his side's World Twenty20 campaign.

The all-rounder has been suffering with patellar tendonitis and missed the last two games of the West Indies tour.

He has had an injection and although he will not feature in Tuesday's warm-up match with West Indies, he is set to appear against India on Wednesday.

"With it only being four overs per game I'm confident I will be able to play a full part in this World Cup," he said.

England have travelled directly to Bangladesh from West Indies, where England now have the two practice matches ahead of their Group One opener with New Zealand in Chittagong on Saturday.

"It was quite a long travel from the Caribbean so unlikely I will play tomorrow against West Indies," Broad said on Monday. "I have not run on it yet since I had my injection but I would say I'd definitely play against India the next day.

"The soreness has gone. During the 12 hours in Dubai I managed to get a gym session so it seems to be progressing well. If it was a Test match tour it may be more concerning."

Broad was also sympathetic towards Durham all-rounder Ben Stokes, who will miss the tournament after injuring his hand punching a locker in frustration during the West Indies series.

"Stokesy is a passionate guy and was disappointed," said Broad. "He stood up and apologised to the team. He was borderline in tears knowing he'd not just let himself down but his team-mates down along with the chance to come to a World Cup.

"He was heartbroken and made his feelings very public to the guys. It will be a learning curve for him.

"No-one wants to take away his natural flair but hopefully he won't rule himself out of too many World Cups doing stuff like that."