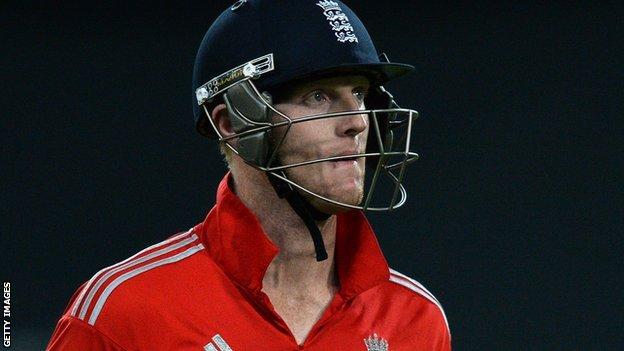 England all-rounder Ben Stokes will miss the World Twenty20 due to a hand injury suffered when he punched a dressing room locker.

Stokes, 22, was angry after being dismissed first ball in the third Twenty20 international against West Indies on Thursday.

He said: "It was a huge error in judgement following a frustrating tour for me. I deeply regret my behaviour."

"For Stokes to do that is just brainless - not amusing at all.

"While he is very promising, he is volatile and his disciplinary record ordinary.

"He can't afford too many more of these incidents because England have shown by sacking Kevin Pietersen that they won't take it for too long."

He will be replaced by Warwickshire all-rounder Chris Woakes.

Stokes' displays had been a rare positive for England during the 5-0 Ashes whitewash by Australia down under.

On his first full international tour, he scored England's only century of the Ashes in the third Test in Perth.

The Durham all-rounder was also man of the match in the fourth ODI in Perth, scoring 70 and taking 4-39 as England beat Australia for the only time on the tour.

But his form for England in the West Indies has been disappointing, with just 13 runs in three ODIs and two T20s and no wickets.

He was an unused bowler on Thursday, having conceded 30 runs in two overs in his previous outing in Barbados.

Stokes added: "I am really disappointed to be missing out on going to a World T20 with England. I would like to wish the team all the very best in Bangladesh."

It is the latest injury to blight England's preparations, with batsman Joe Root out of the tournament after breaking a thumb in the third ODI in the West Indies and captain Stuart Broad a doubt with a knee injury.

Stokes was sent home from the England Lions tour of Australia in January 2013 for disciplinary reasons after he and then Kent pace bowler Matt Coles were found to have ignored the management's instructions over preparation and recovery.

Woakes, 25, is the second player to be added to England's 15-man squad for the World T20 after county team-mate Ian Bell was called up to replace Root.

He has played four T20 internationals, the most recent against New Zealand at The Oval in June 2013.

England play warm-up matches in Bangladesh against West Indies and India before their first competitive game against New Zealand in Chittagong on 22 March.