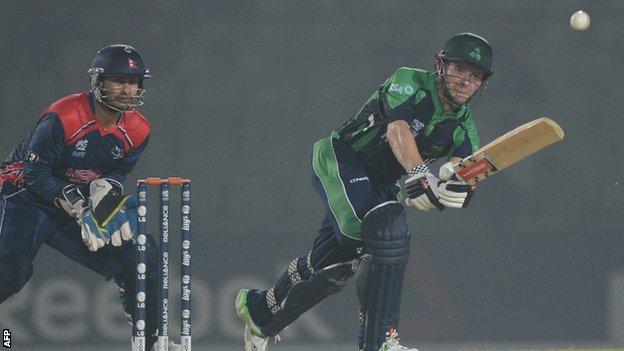 William Porterfield hit 38 while Gary Wilson (29 no) and Stuart Thompson (21 no) brought Ireland to 141-5, winning with five balls to spare.

Ireland play Bangladesh in a warm-up on Friday before starting their World T20 campaign against Zimbabwe on Monday.

The Irish also take on UAE and Netherlands in Sylhet with the group winners qualifying for the Super 10 stage.

Ireland came into Wednesday's game on the back of T20 defeats by Worcestershire and Hong Kong in Dubai.

Gyanendra Malla top-scored for Nepal with 47 from 35 balls while Paras Khadka added 31 in a modest total.

Ireland captain Porterfield and Paul Stirling (19) put on 30 for the opening stand while Andrew Poynter steadied the innings with 28 after Ed Joyce departed for a duck.

Wilson scored his 29 from 20 balls while Thompson needed just 10 balls for his quickfire 21 as Ireland won their opening game in Bangladesh.

In Wednesday's other warm-up games, Hong Kong beat Zimbabwe by four wickets in Chittagong, which was also the scene for Afghanistan beating the Netherlands by 35 runs on a Duckworth/Lewis-adjusted target, while hosts Bangladesh beat the United Arab Emirates by four wickets in Fatullah.