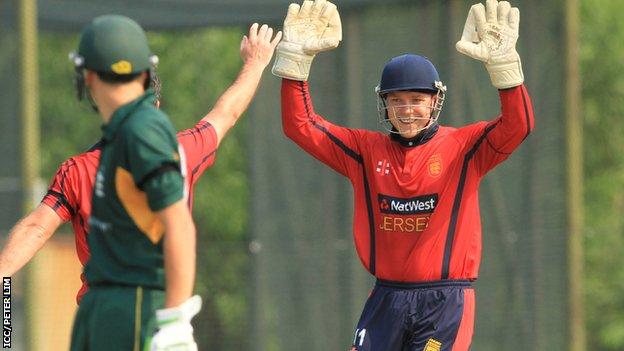 Keith Dennis, who was with the team while they are playing in Malaysia,

Anthony Hawkins-Kay took three wickets for 44 as Jersey bowled out Guernsey for 217 after they had lost the toss.

In reply, Dean Morrison hit 63 not out to guide Jersey into top spot in World Cricket League Division Five.

Jersey will face Malaysia in the final on Thursday after the hosts secured second place following a nine-wicket win over fourth-placed Nigeria, with both finalists gaining promotion to World Cricket League Division Four.

Dennis's wife had called the Jersey team before the match and urged them to beat Guernsey for her late husband.

"Keen to help youngsters play cricket in this part of the region, he has done a lot for cricket.

"He was very supportive of cricket in Jersey and Guernsey. He was a true cricket fanatic."

Guernsey, who failed to win a match, have been relegated to World Cricket League Division Six and will face the Cayman Islands in a play-off for fifth and sixth place.

In the day's other match Tanzania secured third place after beating the Cayman Islands by 12 runs.