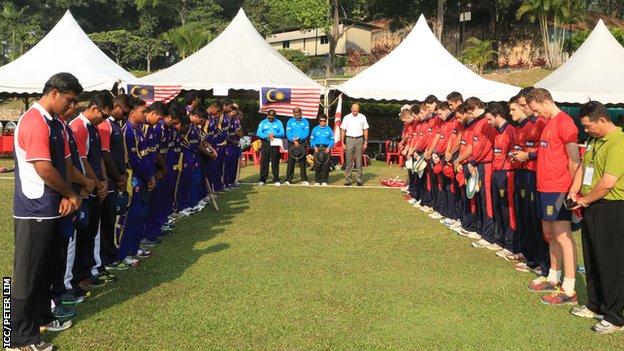 In reply Stevens (83) smashed 14 boundaries before being caught at square leg off the bowing of Hiran Ralalage.

Gough (75*) steered his side home with seven overs to spare.

Before the game, a minute of silence was observed for the passengers on board the

Both teams had gone into the game at the Royal Selangor Club, Kuala Lumpur, unbeaten in the tournament with two wins from two.

The hosts, who won the toss and chose to bat first, lost their first five wickets in the opening 13 overs.

After a steady start to the Jersey innings, Stevens made his 83 from 79 balls to put his side in control. The island's youngest ever player Jonty Jenner was 20 not out at the close.

"Let's just hope that the momentum will continue for us."

The Channel Islanders now know a win over Cayman Islands on Monday would secure promotion to Division Four with a match to spare.

Meanwhile, after Sunday's other matches Guernsey remain without a win, losing their third consecutive game of the tournament. They suffered a 48-run defeat to Tanzania in a low-scoring match.