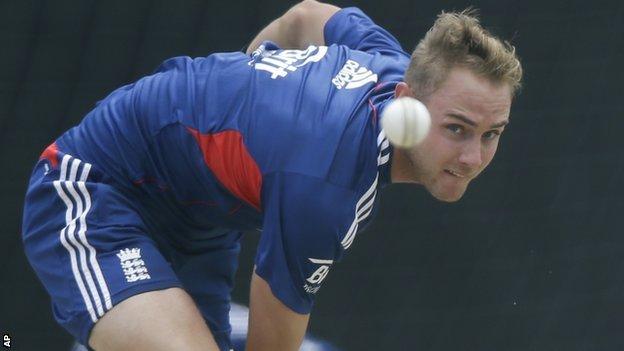 Stuart Broad is proving to be an impressive England captain, according to former skipper Michael Vaughan.

The Twenty20 captain has also been leading the national side in the 50-over format for their current tour of West Indies.

Broad led England to victory over West Indies in Sunday's ODI in Antigua after picking a side including four spinners.

The career of Stuart Broad

2013: Helps retain Ashes in England, but embroiled in row after standing ground following appeal for catch during crucial stand in first Test at Trent Bridge

"He looks an England captain. He is proactive, he's not scared of making a few calls in terms of field settings," Vaughan added on BBC Radio 5 live's Tuffers and Vaughan Cricket Show.

Alastair Cook, who captained England in the heavy defeats in the Ashes and subsequent 50-over series in Australia, was rested for the current tour of West Indies, which comprises three ODIs and three T20 internationals.

Broad has led the T20 side since May 2011, but the opening match of the current ODI series was the first time the 27-year-old had captained England's 50-over team.

England lost the first match by 15 runs but, after bowling West Indies out for 159, they were guided home by Ravi Bopara and Broad in Sunday's three-wicket win.

"The England and Wales Cricket Board have made their statement, Alastair Cook will carry on as Test captain," continued Vaughan, who captained England from 2003 to 2008. "But what I am seeing is they have a very good deputy in Stuart Broad.

"In the second game you could see that he had learned and he made an incredibly brave decision (to put West Indies in).

"To bowl first, when you have four spinners on a used pitch, I found quite staggering. To think they felt that was the best way of winning the game, it almost allowed the opposition in - but it worked."