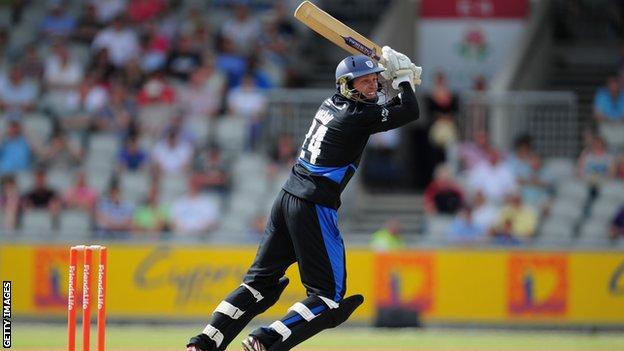 Batsman Gordon Muchall hopes Durham's smaller squad will mean chances for him in 2014 after failing to make a single Championship appearance last season.

A handful of experienced players left this winter, while Ben Stokes and Scott Borthwick broke into the England team.

and four others were handed new deals, but is the only close-season arrival.

"The chance is there now for players on the periphery last year to really stake a claim," Muchall told BBC Newcastle.

"The squad is certainly a little bit thin, but that also gives a chance for young players to break in to the team."

The 31-year-old has spent his entire career with the club since making his debut in 2002, and despite despite a lack of four-day action for the 2013 county champions, he was an ever-present in limited overs cricket, averaging over 45 in both formats.

In a winter of upheaval at Chester-le-Street, Durham handing first-team coaching duties to Jon Lewis.

That decision will mean the policy of giving opportunities to academy-produced players continue, with four of the five players given new contracts this winter from Durham's youth system.

"I think the club are still hopeful of bringing an overseas player in," Newcastle-born Muchall continued.

"After losing a few senior players we're missing a bit of experience, but there's a nice buzz around because the departures means the players here are really competitive.

"If we can get on a roll early, then we stand a good chance at pushing for the title again."