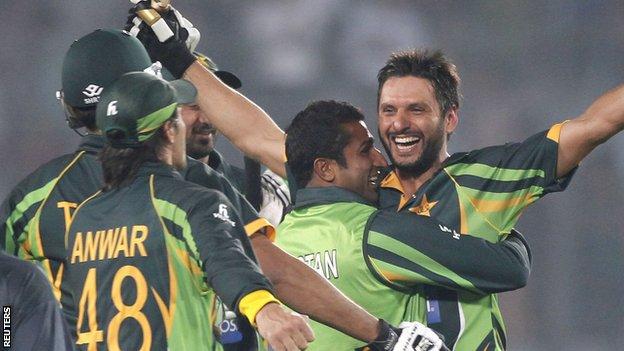 Shahid Afridi blasted Pakistan to a one-wicket victory over rivals India in a tense finale to their Asia Cup group match in Mirpur, Bangladesh.

With five balls left, Pakistan needed 10 to win with the last pair together.

But Afridi (34 not out) launched Ravichandran Ashwin for two sixes to win the game with two balls to spare.

In reply, Ahmed Shehzad (42), Mohammad Hafeez (75) and Sohaib Maqsood (38) helped Pakistan to 200-4 with more than six overs left before Hafeez holed out at deep square leg off Ashwin and Maqsood was run out next over.

All-rounder Afridi - whose mercurial career never leaves fans certain whether he will play a heroic innings to win the game or throw his wicket away carelessly - was his usual belligerent self, while Umar Gul also cleared the ropes.

But Afridi was in danger of running out of partners when Gul was brilliantly caught at long-off in the penultimate over to leave Pakistan seven down with 11 still needed.

Mohammad Talha and Saeed Ajmal both fell for golden ducks, but last man Junaid Khan was able to push the second ball of the last over for a single to bring Afridi back on strike, and the experienced all-rounder was able to finish the match in grand style, his unbeaten 34 coming off only 18 balls.

"Expectations were high," said Afridi. "We all know how important this game was and I am glad I did it.

We have the label of being bad chasers, but Afridi finished it perfectly

"It's a great occasion whenever we play against India and today was our day."

Captain Misbah-ul-Haq added: "We have the label of being bad chasers, but Hafeez and Maqsood did well and Afridi finished it perfectly."

India skipper Virat Kohli, deputising for the injured Mahendra Dhoni, conceded: "We were 20 to 30 runs short with the bat, but this game could have gone either way.

"We may not make it to the final, but I am proud how the bowlers fought back."

Defending champions Pakistan now top the table with two wins from three games, and look favourites to contest the final with unbeaten Sri Lanka, who can book their place by beating Afghanistan on Monday.

Meanwhile, India need other results to go their way if they are to make the final, even if they overcome Afghanistan in their final game.

Afghanistan stunned Bangladesh on Saturday with their first international victory against a full member of the International Cricket Council.