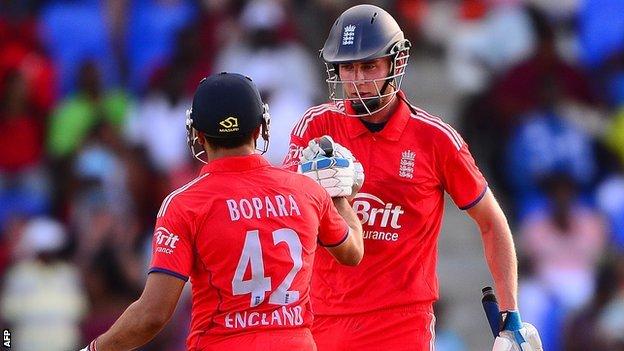 England won a tense second one-day international against West Indies by three wickets to level the series at 1-1 with one match remaining.

Ravi Bopara and captain Stuart Broad saw England to victory with a partnership of 58 after a collapse had threatened their pursuit of 160.

Four wickets fell in four overs in Antigua after the tourists made a confident start to their chase.

England's spinners had bowled tightly to help dismiss the hosts for 159.

And Broad struck the winning runs with more than five overs to spare as England recorded only their second win in an international match since the start of the disastrous Ashes series.

"Winning these matches is important - it gives you confidence, if anything else. These guys will be going to the World Twenty20 in a couple of weeks. The win builds confidence and gives you self belief. Even if it's an inconsequential series, it's a victory. They go into the next match on Wednesday knowing they can win the series."

The wicket at the Sir Vivian Richards Stadium, which will also host Wednesday's series decider, was the same one used in Friday's first ODI. And its turning properties were similar to those likely to be faced in the forthcoming ICC World Twenty20 in Bangladesh.

Broad decided to bowl after winning the toss and his bowlers, whom he had blamed for England's defeat in the first match of the series, rewarded him by dismissing their opponents inside their allocated 50 overs.

Lancashire spinner Stephen Parry was named man of the match after taking three wickets on his international debut, with England's slower bowlers dismissing eight of the 10 West Indies batsmen to fall.

England were then well set at 79-2 off 20 overs before a succession of quick wickets put their chase in jeopardy.

Openers Moeen Ali and Michael Lumb, who made 106 on his ODI debut in the first match of the series, looked comfortable until their stand of 29 was ended when Moeen was caught by Nikita Miller off the bowling of Ravi Rampaul.

Luke Wright did not last long, bowled by spinner Sunil Narine for nought.

Lumb's dismissal, trapped leg before wicket by Miller, was the first wicket of an England collapse which started when three batsmen fell in six deliveries, including Jos Buttler for a first-ball duck. 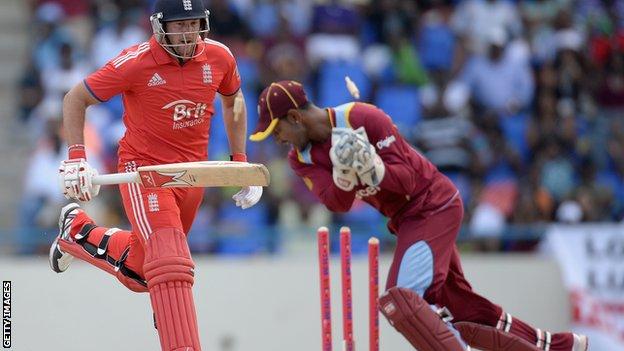 Tim Bresnan was brilliantly run out by Dwayne Bravo to reduce England to 105-7 and bring Broad to the crease.

The captain took risks but rode his luck, and after Bopara had helped calm England's nerves with a composed 38 not out, Broad struck the winning runs with a four through the covers off Dwayne Smith.

Earlier, Broad rotated eight bowlers to good effect in dismissing the hosts for 159 with 34 deliveries of their innings unused.

A historic turn of events

England's 164 deliveries of spin were the most by the national side in a single ODI since 1985, when Norman Gifford, Pat Pocock, Phil Edmonds and Rob Bailey sent down 216 in a defeat by Pakistan in Sharjah.

Four spinners were used, including top-order batsmen Moeen and Joe Root, the latter of whom opened the bowling.

After West Indies were reduced to 30-3, Lendl Simmons, the match's top scorer with 70, initiated a recovery helped by Darren and Dwayne Bravo, until the latter was stumped by Buttler off James Tredwell.

The West Indies captain was given out after TV umpire Marais Erasmus consulted video replays to see whether the ball or Buttler's gloves had broken the stumps, and following Bravo's dismissal the home side subsided from 133-4 to their disappointing final total.

Tredwell finished with 2-39, while Parry took 3-32 from his full allocation of 10 overs.