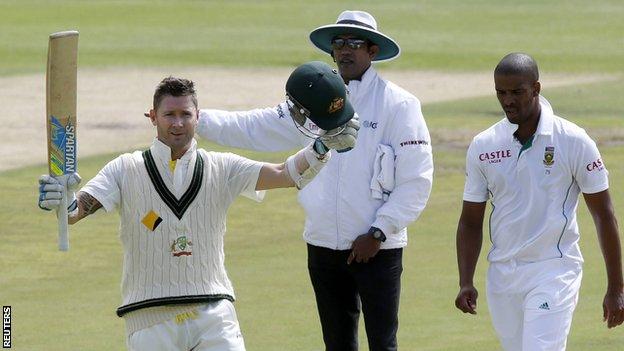 Australia captain Michael Clarke hit his 27th Test hundred as his side continued to dominate the deciding Test against South Africa in Cape Town.

Clarke reached an unbeaten 161 and guided Australia to 494-7 before rain washed out further play shortly before tea on the second day.

The 32-year-old spent 24 balls on 99 before finally reaching his century.

South Africa were without main spearhead Dale Steyn, who suffered a hamstring strain on the opening day.

In the absence of Steyn, who helped level the series by claiming 4-55 on the fourth day of the previous Test at Port Elizabeth, South Africa lacked a cutting edge.

Clarke took the precaution of wearing an arm guard after being hit on the elbow, gloves and helmet by Morne Morkel on day one, but looked in little trouble throughout the day.

Resuming on 92, he reached three figures before lunch during an opening session in which the hosts claimed only one wicket, Steve Smith playing on to Dean Elgar for 84, ending a fourth-wicket stand of 184 in 50 overs.

South Africa were more successful in the afternoon session, with off-spinner JP Duminy having Shane Watson caught in the deep after he raced to 40 off 32 balls.

Duminy followed that by claiming wickets off successive balls when Brad Haddin picked out Hashim Amla with a fierce drive, before the decision review system detected the faintest of edges behind to dismiss Mitchell Johnson.

Rain halted any further progress for South Africa but when rain set in, Clarke - the second centurion of the innings after David Warner's 135 on the opening day - had hit 11 fours and scored the second hundred of his career at Newlands.

The series is poised at 1-1 with South Africa aiming to claim their first home Test series victory over Australia in 44 years.