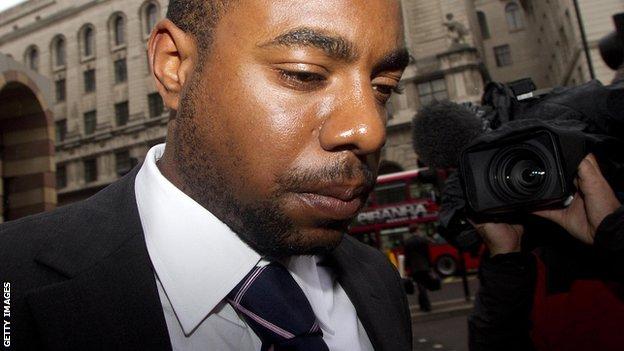 Mervyn Westfield is the cricketer who went to prison. He is the English individual who embodies the threat of corruption to an entire sport.

Yet, spend a couple of hours in his company and it's almost impossible not to end up liking him.

Self-effacing, laid back, it's clear that Westfield derives much of his notoriety from naivety. He allowed himself to be moulded and manipulated. But he knows he can't paint himself as a victim.

He was only 21 when he was approached by Essex team-mate Danish Kaneria, the spin bowler who played 61 Test matches for Pakistan, and told he would make £6,000 if he bowled badly.

Westfield had to concede 12 runs from his first over in a Pro40 game against Durham in September 2009. In fact, the north-east side only scored 10 runs, but the fast bowler was still paid.

Nevertheless, the incident would destroy his career, end his hopes of playing for England and see him serve eight weeks of a four-month jail sentence.

He never spent the money and didn't even carry out the spot-fix correctly, but the stark fact is he took £6,000 to deliberately bowl badly. It was a decision which eventually left him in one of Europe's most secure prisons. At Belmarsh, he learned how to live alongside murderers and exist on 10 minutes of outdoor activity a day.

"Whatever punishment they gave to me, I had to take it," he said. "I did wrong and got punished for it. I've just got to accept it.''

Part of the process of "just accepting it" is learning to come to terms with Kaneria.

He was the respected experienced overseas player, the Pakistan international with more than 250 international wickets, and Westfield's next-door neighbour. He was the man Westfield first met in the Essex dressing room when he was just 18 years old.

Kaneria's role in suggesting and organising the spot-fixing plan in 2009, and his malign influence over Westfield, was acknowledged during the trial and reflected in Kaneria's lifetime ban from cricket.

When I ask Westfield what he would say to Kaneria if he met him now, he finds the question too difficult to answer. When I wonder if there is "unfinished business" between the two of them, Westfield thinks carefully before saying: "Not really, no. At the end of the day I am my own person. I don't hold any grudges, it is what it is to be honest."

Describing his time at Belmarsh Prison, Westfield, now 25, said: "I wouldn't wish it on anyone.

As well as receiving a prison sentence, Westfield was banned from professional cricket for five years and stopped from participating in club cricket in any capacity for three. The second ban has now been reduced after he agreed to participate in an anti-corruption programme run by the Professional Cricketers' Association.

Thinking backwards is, he says, wasted energy. He has a new role now.

"I want to turn around and speak to whoever I can, anyone who wants to speak to me and asks me what happened, so they don't have to fall into the same trap," he said. "I don't want anyone to make the same silly mistake I did.''

Cricket is the only career Westfield has known. A month after his 17th birthday, he made his first-class debut for Essex and dreamed of representing his national side. He took 11 first-class wickets and had his whole career ahead of him, before he pressed the self-destruct button.

He now pays the bills by doing odd jobs. The process of player education is his main vocation, with the help of the PCA, who organise his diary and encourage him to confront and share his experience. It isn't easy.

My interview with Westfield is the first he has done in any depth with a journalist. Shortly before we spoke I had watched him address 20 young cricketers in their first year as professionals.

One told me later he had been in awe of the cricketer and his cautionary tale of corruption and its consequence. It left the room in contemplative silence. But Westfield finds it gruelling.

"Obviously it's nerve-wracking," he said. "You don't know what they are going to ask you, but it's good.

"Corruption happens, not a lot, but you hear of it here and there. They look to target more vulnerable people, so young players should 100% take it on board and listen to warnings. Actually hearing it from someone who has been through it and experienced it you obviously listen a bit more.''

Westfield is also visiting the counties too, talking directly to his contemporaries, people he knows well, men he played against and socialised with.

When the spot-fixing case first came to light, Westfield felt he was left isolated by his Essex team-mates. Perhaps this was understandable, but it made him wonder if players now would shun him too. However, on his first visit to Somerset, he was greeted with hugs by more than one player - and that has left Westfield cautiously optimistic.

That is certainly the plan. Accepting this road to redemption has already given Westfield a reward.

He is still banned from playing professionally, but his involvement in the PCA anti-corruption programme has reduced his club-cricket ban. In April he will be able to pick up a ball and bowl again, not for Essex, but in Essex. Frinton, on the coast, is his new club.

He added: "I feel like a kid. I haven't actually played cricket for three or four years. Now I've got a chance to go and play again in a couple of months I'm delighted. I've just wanted to do that ever since I got my ban. I'm happy, definitely."